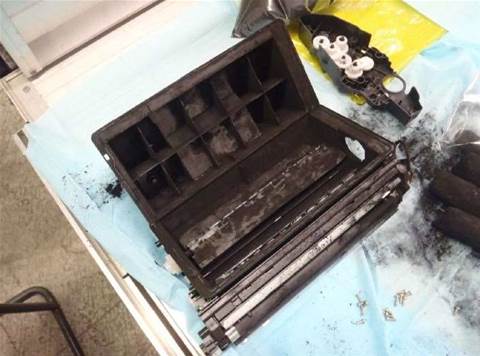 Commercial quantity of drugs hidden in boxes of ink.

A 27 year-old female has been charged with importing seven kilograms of methamphetamine into Australia hidden inside several boxes of printer cartridges.

The Australian Customs and Border Protection Service last month intercepted three boxes of printer cartridges at Sydney Airport's air cargo facility, and found them to contain a white powder - later confirmed to be methamphetamine - instead of toner.

When an additional package arrived two days later and was similarly found to contain white powder, the Australian Federal Police and Customs identified the recipient and conducted a "controlled" delivery of the four boxes to a Melbourne CBD address.

Customs today said a 27 year-old female had been arrested and charged after receiving and accessing the boxes.

“This importation is at the higher end of the scale for mail items, and [this] arrest is yet another example of Australian law enforcement agencies sharing information, intelligence and resources to bring criminals to account," AFP's manager  of serious and organised crime Scott Lee said.

After tests revealed the powder to be methamphetamine, the AFP sent the packages on to their intended destination in south Brisbane and arrested two men when they arrived to collect them.

The 23 and 25 year-old men were each charged with importing and attempting to possess a commercial quantity of a border-controlled drug.