[Blog post] Protecting users is noble, but could iiNet fall victim to its past legal success?

There can be no doubt that iiNet’s decision to keep Dallas Buyers Club’s nose out of its subscriber database is best practice in terms of championing the customer. But will the ISP inadvertently hand Hollywood and its lobbyists a political win?

As iTnews reported last week, the owners of Dallas Buyers Club have lodged an application in the federal court to make iiNet hand over information about customers they suspect of illegally sharing the film online.

In all likelihood that means that Dallas Buyers Club investigators have monitored BitTorrent file-sharing swarms involved in distributing the film, and logged the IP addresses of the computers or modems involved.

Now these investigators want the federal court to order iiNet and handful of other smaller ISPs to tell them who was using those addresses at the time.

iiNet has told its customers it will do whatever it can to resist that, meaning that some time later this year or early next year its lawyers will stand up in court and argue that it shouldn’t have to hand over the details.

In the US, Dallas Buyers Club’s maker, Voltage Films, has sent scores of letters to individuals claiming they’re liable for fines of up to $US150,000 unless they reach some sort of settlement with the company.

It’s believed that some consumers have done just that, and quietly coughed up few thousand dollars to avoid litigation.

Understandably, iiNet and others see this conduct as an unacceptable for its cowardice and bullying. In a blog post, iiNet’s regulatory chief Steve Dalby wrote:

“It might seem reasonable for a movie studio to ask us for the identity of those they suspect are infringing their copyright. Yet, this would only make sense if the movie studio intended to use this information fairly, including to allow the alleged infringer their day in court, in order to argue their case."

However, iiNet could also find that its putting the court in a tricky position.

iiNet argued during its landmark "iiTrial" copyright dispute with Hollywood that its opponents – an armada of studio interests represented by the then-Australian Federation Against Copyright Theft – weren’t doing enough to independently use court powers to pursue individual infringers.

More difficult for the court still, iiNet said it would happily embrace any opportunity to help copyright owners in these endeavours. Take this excerpt from iiNet's outline of submissions from Roadshow Films Pty Ltd & Ors. vs iiNet Limited, dated September 28, 2009:

“The applicants are not willing even to attempt to use well-established avenues for enforcement of their rights directly against the internet users they accuse of engaging in infringing conduct. Not one of the applicants has applied for preliminary discovery from iiNet or any other ISP in order to identify the account to which an IP address was allocated in order to sue an end-user.

“iiNet has consistently maintained that it would readily comply with such an order and indeed has joined with other ISPs in proposing a streamlined preliminary discovery process to facilitate such an approach.”

Then, yes. Today? Not so much.

No doubt this will have some of the anti-piracy figures out there muttering a phrase involving the words ‘cake’, ‘eat’ and ‘too’.

iiNet’s spokesman did a pretty good job of explaining the inconsistency. He said the carrier’s legal position during the trial was based on the assumption that a suitor would be pursuing level-headed, black letter litigation, and explained that Dallas Buyers Club’s methods don’t fit that description.

It’s true that Dallas Buyers Club could intimidate Australian consumers with fines for copyright violation available in our jurisdiction - up to $93,000 - but they would ultimately have to prove that any individual was engaged in copyright infringement of a commercial scale (even if they didn’t make a financial gain).

However, another excerpt from the same September 2009 submission could make it hard for the court to accept iiNet’s retroactive qualification.

Dalby and iiNet participated in the preparation of a submission on internet piracy to the Government in 2008, alongside Telstra, Optus, Internode, Unwired, Westnet, Verizon and Google, which read:

"(a) ISPs will and do co-operate in any actions taken directly by rights holders against file sharers;

(d) ISPs propose a streamlined preliminary discovery process in the Federal Court or Federal Magistrates Court whereby the application for discovery by a rights holder be made according to a pre-agreed protocol in return for which the ISPs would not oppose the application and that it may be possible to further streamline the process by filing pre-agreed consent orders."

Those are hard words for iiNet to walk away from - especially when it asked the court to accept them as part of a long-fought legal battle that ultimately protected it from having to accept any liability for the damage its customers may or may not inflict on the entertainment industry.

And, if the ISP is allowed to walk away from those words, how will that action be taken by today’s pro-business and anti-piracy government?

While Hollywood’s loss to iiNet in the High Court in 2012 settled legal questions over whether Australian copyright law exposed ISPs to liability for illegal file sharing, it also showed that those same laws had substantially failed rights holders.

The judgment prompted then-Attorney-General Nicola Roxon to push her department to wave the stick of legislation around, and corall rights holders and carriers into a room to sort it out.

To date, they have not.

If the court gives carriers the ability to tell copyright owners how and when they can enforce their rights, how might the current Attorney-General George Brandis respond?

It promises to be an interesting show. 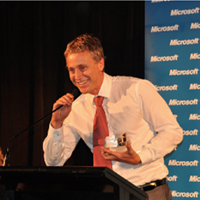 Read more from this blog: Filtered