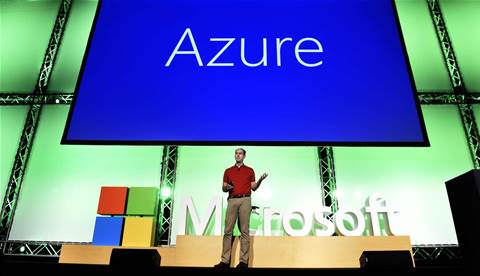 Microsoft today held a launch event for the arrival of its Azure cloud platform in Australia and announced would offer its "ExpressRoute" dedicated fibre connections to its local data centres in partnership with Telstra and Equinix.

Microsoft Australia's US parent last week jumped the gun on the local subsidiary's launch announcement, revealing Azure would go live in Sydney and Melbourne this week.

At the company's annual Australian TechEd event today, Microsoft said the ExpressRoute offering would be made available locally to allow Australian customers and partners to create private connections between the Sydney and Melbourne Azure regions and their on-premise or co-lo infrastructure.

ExpressRoute via Equinix will be generally available later this year, while ExpressRoute Telstra customers will need to wait until 2015. Pricing for the product locally has not yet been made available.

Each of Microsoft Australia's two new local Azure data centres - understood to be housed in NextDC facilities - is about the size of two 747 jumbo jets, and boasts end-to-end with capacity for up to 600,000 servers per facility, the company boasted.

Guthrie also announced the new G family of servers, which he said offer up to 32TB of storage per VM with 50000 IOPS per VM and less than 1ms read latency.

Australians will be charged a significantly higher price for a number of common Azure offerings than comparative products in the US and Asia.

For the lowest level virtual machine on the service - the general purpose computer basic with a single core and 0.75GB RAM - Australian customers can expect to pay $18.17 per month, compared to $13.12 in central US and southeast Asia.

The top of the line general purpose computer standard 8-core 56GB service will cost Australians $1048 a month, compared to $990 in the other two regions.

And for the same offering with 14GB RAM, Australians will be charged a hefty $679 - compared to $540.88 for the same service in southeast Asia or central US.

A large website with 4 CPU cores and 7GB memory will cost Australian businesses $378.42 a month, where US and southeast Asian customers would receive it for $300.72.

Microsoft's Azure 'blob' storage will cost Australians $0.0633 per GB for read-access geographically redundant storage per 1000TB to 5000TB per month, where the US and southeast Asian would get it for $0.0575 per GB.

Similarly, for its 'tables' storage (NoSQL storage for unstructured and semi-structured data), Australians will be charged ﻿$0.0813 per GB of 1000TB to 5000TB per month, compared to $0.0757 per GB in the US and southeast Asia.

Microsoft is also not offering every Azure service in Australia as yet. According to its website, backup, site recovery, machine learning, mobile services, DocumentDB and HDInsight, among others, are yet to be made available from the local data centres.

Carsales CIO Ajay Bhatia told iTnews his team had already migrated to the local Azure instances, and was reaping the benefits of a reduction in latency.

Despite the higher cost of many of the local services, Bhatia said the business benefits from the local Azure offerings would outweigh a small cost differential.

“If it did cost me marginally more, I would be up for it," he said.

Carsales turned to Azure - on the US west coast - when it came to a crossroads several years ago. Faced with a rapid growth, it needed to find a way to deal with a need to store more and more images.

It had clear evidence that car ads with more images sold better and those sales translated into revenue. But the company was unable to cope with the rapid growth when hosting everything internally.

At that point it turned to Azure. The value of that arrangement was proven when it was faced with a system outage at the time - it was able to migrate services from that Azure data centre to one in Brazil with no service interruption. It was therefore a no-brainer to take up the local option.

“We need to move fast. Moving fast was the first requirement. For example, two or three weeks ago we went to unlimited images. Previously, if someone asked me for unlimited images for every ad, I would have freaked out," Bhatia said.

Carsales is expanding its reach through southeast Asia with Indonesia, Malaysia and Thailand already online, and South Korea and Brazil to follow soon. It means the infrastructure and systems Carsales huse must be able to quickly scale to accommodate that growth, Bhatia said.