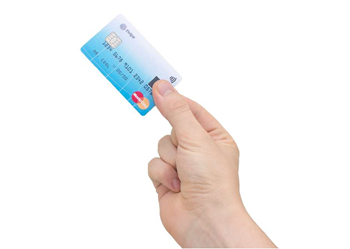 MasterCard is set to offer the world's first credit card equipped with a fingerprint scanner in an effort to minimise fraud.

The payments provider has teamed up with Norwegian biometrics company Zwipe in the UK to offer customers an embedded fingerprint scanner that will store a user's thumbprint within their credit card.

The fingerprint scanner will interact with MasterCard's contactless payment offering to allow customers to tap and pay, bypassing a signature or PIN, and certifying the transaction with their fingerprint.

The move is aimed at preventing thieves from abusing the contactless payment option with stolen credit cards by asking for a 'digital signature' - the fingerprint.

The sensor reads a user's fingerprint in under a second, and compares it with the fingerprint record stored within the card. If both match, the transaction goes ahead. The scanner is powered by the payment terminals, removing the need for a battery.

Zwipe's MasterCard credit card was trialled in a limited fashion in partnership with Norwegian bank Sparebanken DIN, which has since said it will use the technology in all its cards.

The cards will now be rolled out more widely in the UK. Neither MasterCard nor Zwipe commented on the prospect of a global rollout.

"Our belief is that we should be able to identify ourselves without having to use passwords or PIN numbers," Ajay Bhalla, president of enterprise security solutions at MasterCard, said in a statement.

"Biometric authentication can help us achieve this. However, our challenge is to ensure the technology offers robust security, simplicity of use and convenience for the customer. Zwipe's first trial is a significant milestone and its results are very encouraging."

Consumer giant Apple has also recently begun to use its TouchID fingerprint technology in its own Apple Pay payments service, a new solution offered in its iPhone 6 models.

Apple Pay involves an embedded NFC chip, a secure element to store encrypted payment details, Apple’s TouchID fingerprint technology, and its existing Passbook application to allow the smartphones to be used as digital wallets at point-of-sale.

MasterCard signed up as one of the first partners of Apple Pay, which becomes available for use in the US tomorrow. The company also recently launched a "MasterCard Nearby" app which alerts users to retailers in their location which accept Apple Pay.