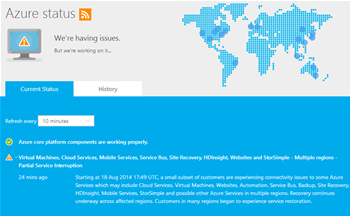 Users of Microsoft's Azure cloud computing platform have been experiencing outages and intermittent connections since around 4am today Australian time.

It said a "small subset" of customers were affected but did not offer further detail. The connectivity issues are affecting Microsoft's global customers, including those served from its two as-yet unannounced data centres in Australia.

Soon after it identified the problem, Microsoft began work on rectifying the "full service interruption" issue, but is still yet to completely restore services.

As at 8:30am eastern standard time Azure core platform components were working properly, according to Microsoft.

Microsoft is yet to officially unveil its Azure presence in Australia, despite first announcing plans for two facilities in New South Wales and Victoria in May 2013.

The company already has network traffic running between the nodes - understood to be located at NextDC facilities - and has previously signalled an official end of year launch.

The Azure outage is the latest in a series of service interruptions Microsoft has experienced across the globe in recent weeks.

It follows a worldwide outage to its Visual Studio Online Services late last week as well as a CRM Online global glitch, and another Azure service interruption in Japan East at the same time.