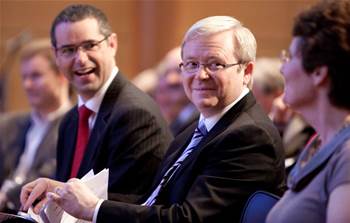 Opposition hits back at reviews 'written by mates'.

A Coalition-commissioned audit of the conception of the national broadband network has found the policy formation was “rushed, chaotic and inadequate”, and recommended future projects worth more than $1 billion be subject to a cost-benefit analysis that is published in full.

In March, the Coalition Government tasked former Telstra executive and current Swinburne University Chancellor Bill Scales with auditing the process by which its political opponents, the former ALP Government, conceived of the NBN.

Scales was asked to study the period from when Labor issued a request for proposal for the NBN in April 2008 to the release of the NBN implementation study in May 2010, and provide recommendations on future actions an Australian Government should take when approaching a project of the scale of the NBN.

In a 186 page report [pdf] tabled by the Government last night, Scales said he had found no evidence a business case, independent study or cost-benefit analysis had been undertaken in developing the second NBN policy.

He said the initial set up of NBN Co had resulted in "a long-lasting and detrimental effect on its operations" and the network’s rollout.

Scales found that while the initial conception of the NBN had been conducted appropriately, the Labor Government’s revised vision for the NBN in 2009 had been “rushed, chaotic and inadequate”.

Only 11 weeks of consideration had been given to the policy and there was “no evidence that a full range of options was seriously considered”, he said.

Scales found the full cabinet did not consider the policy until early on the morning it was announced, with its role primarily to “rubber-stamp” the proposal.

“The decisions made by the Rudd Labor government during this 11-week period and the means by which they were made had, and will continue to have, a profound effect for many years on the rollout of Australia’s NBN, its cost and its effectiveness,” Scales said in the report.

The company set up to run the national broadband network, NBN Co, had been given an “impossible assignment” that only a “well-functioning, large and established” telecommunications company could achieve considering the tight deadlines set for the rollout, the former Telstra executive said.

Scales said he had been advised that in its first year of operation, a number of NBN Co executives were “making it up as they went”.

“NBN Co was a start-up company given a job that only a well-functioning, large, and established telecommunications company would have been able to undertake in the allotted timeframe.”

Scales also set his sights on the Australian Competition and Consumer Commission (ACCC), criticising the advice the regulator provided to Labor prior to its decision to shift from a fibre-to-the-node network to fibre-to-the-premise.

He said the ACCC had “overstepped its authority” in advising Labor that FTTN was not a stepping stone policy towards FTTP.

Scales recommended that projects the scale of the NBN - those worth more than $1 billion - undergo a public cost-benefit analysis, with the results of the analysis to be made public before the project starts.

The Scales review is one of six audits the Government has commissioned into the NBN project. The Coalition is expected to release a cost-benefit analysis of its own NBN plan before the end of the year.

Communications Minister Malcolm Turnbull said in a statement the Government would use the report's recommendations to "further improve the governance of the project".

Shadow Communications Minister Jason Clare said the report was 'politically motivated' and the Coalition should 'get on with building the NBN' rather than 'getting mates to write reviews'.

Former Communications Minister Stephen Conroy told ABC AM radio the Government had now spent $10 million on six reports to 'attack the NBN' because "[Turnbull's] policy is a dog".

".. The Rudd/Gillard Government had the courage not ... to cave in to Sol Trujillo and Telstra when they sabotaged the process back in 2008/9."