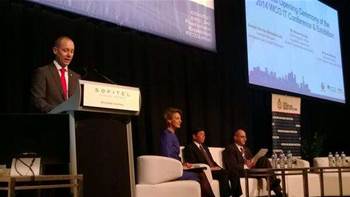 Noble removed from IT to lead merger, Brugeaud promoted.

The technology leadership at Australia’s Customs agency has undergone a reshuffle ahead of its merger with the Immigration department, with its CIO moved out of IT and its former CTO promoted into the role.

Rachel Noble and Randall Brugeaud both joined the agency as CIO and CTO respectively in May last year.

The pair were appointed to the department during a period of significant restructuring, which saw its 253-person IT division split into two, with the majority reporting into the CTO.

Noble as CIO was tasked with a higher-level IT strategy role, while Brugeaud as CTO acted as the traditional leader of an IT operations department.

This month the department restructured its operations in line with its 2013-18 blueprint for reform and in anticipation of its Government-mandated merger with the Immigration department.

Noble was moved laterally into a new position of first assistant secretary and national director of the executive division, tasked with a “critical” role of managing both departments, as well as key stakeholders, through their consolidation, which is to be completed by next July.

Her new role represents the first movement both Customs and Immigration have made towards their merger.

Noble lost IT as part of the shift, but gained responsibility for a range of consolidated executive support functions - specifically communications and media, parliamentary and executive co-ordination, strategy and governance, and capability and planning - in the first set of merged of functions for the agencies.

The department opted to split the two - which had previously been performed in unison under the ‘border enforcement’ division of Customs - and promoted CTO Brugeaud into the vacant CIO role.

The former CTO role was subsumed into the CIO position as a result.

The CIO function was also moved out from ‘border enforcement’ into the ‘border management’ division of Customs under chief operating officer Marion Grant - Brugeaud’s previous home as CTO. He now reports directly into Grant, rather than through the national director of support as he had done as CTO.

Noble’s previous role as national director of intelligence is being temporarily filled by John Beveridge, the former national manager of investigations, and has remained within the border enforcement division.

A spokesperson for Customs said Brugeaud’s new position - officially titled national director technology and chief information officer - centralises accountability for all IT policy and capabilities across the services, excluding maritime.

“This includes traditional ICT capabilities as well as information policy and broader operational technologies such as CCTV, e-gates, biometrics, x-ray, forensics and officer-borne technologies including cameras, radios and mobile devices.”

Brugeaud’s time will be spent focusing on a number of significant IT projects currently underway at Customs, including the implementation of a new border clearance system, an upgrade to its fleet of electronic gates, and better utilising big data.

The future for two CIOs in one agency

The department is currently working in unison with the Department of Immigration to create a new, combined organisational structure in line with the Government’s directive to merge the two agencies.

The pair have until July 1 next year to implement the new arrangement, which was announced by Immigration Minister Scott Morrison in May.

Customs will be merged into the Department of Immigration and Border Protection, and the combined agency will be fronted by the Australian Border Force, which will control the operational border, investigations, compliance, detention and enforcement functions of the agency.

Customs confirmed portfolio consolidation and reform would be involved in the restructure, but was unable to comment on the future of its IT leadership given the operational changes.

iTnews understands a decision is yet to be made on the structural make-up of its IT unit under the new agency, which will also affect the IT team lead by Immigration CIO Matt Yannopoulos.