RSA chief calls for cooling of US, China tensions 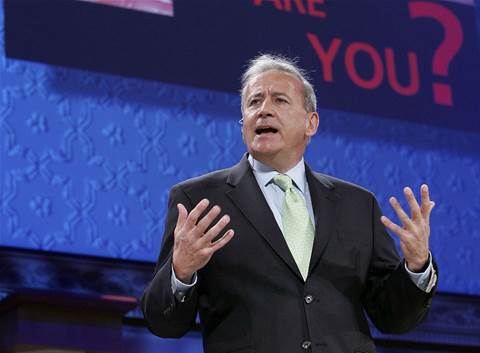 Government snooping permissible in a digital world without norms.

Private enterprise is the victim of the erosion of trust between nation states struggling to agree on norms of behaviour in the digital world, according to RSA executive chairman Art Coviello.

Delivering his keynote address to the RSA Conference in Singapore today, Coviello attempted to address the tension between the United States and China – and to a lesser degree, the United States and Europe – by suggesting that governments and businesses have not had enough time to develop the ground rules in a connected world.

Coviello made no mention of RSA’s complicity in these tensions as he did at the San Francisco event in February, aiming at a balance that would appeal to an Asia-Pacific audience caught between two warring world powers.

“While everyone intellectually acknowledges that [our economies] are thoroughly interdependent today, nations and companies continue to behave as though they are not,” he said.

“We continue to pretend that geography, identity and incorporation are still the most meaningful dividing lines, ignoring the fact that the digital world has blurred those lines beyond recognition.

“We have only had two decades to figure out norms of the digital world. That's why we're experiencing anxiety and uncertainty responding to incidents that would be far more clear cut in the physical world. We are trying to operate in an intertwined digital world without agreed upon norms of behaviour.”

Coviello said he “wasn’t really sure” what the “responsible role of national governments in a borderless digital world” should be.

“That is why we struggle with the ethical implications of the United States' and China's and other country's methods of digital intelligence gathering,” he said.

The relationship between China and US is deteriorating, he said, “because both countries have engaged in digital activities that the other finds offensive".

"The Chinese complain about the NSA’s digital intelligence gathering. The US complains about Chinese using cyber espionage for economic gain. The result? The nascent work on cyber crime prevention that had been developing between the two countries ground to a halt. Trust me, both nations are the poorer for it.”

Those tensions have made it difficult for many US-based vendors to continue their penetration into the Chinese market, with IBM, Cisco, Microsoft, Google and Apple officially on the nose of the Chinese government.

Coviello told iTnews that RSA continues to have an "active business in China."

"We have seen no real drop off in sales in China, as a matter of fact it continues to grow," he said.

Beyond China and the US, Coviello spoke of “long standing relationships between the US and European countries have become strained under a growing cloud of mistrust over each other's agenda and digital activities".

The RSA chief told reporters after his presentation that he didn’t think a treaty would necessarily set these norms. But bilateral agreements between nation states, possibly spurred on by the demands of the private sector, could set the wheels in motion, he said.

“The Snowden thing has not helped that, now we have governments not trusting each other, which is a bad, bad result,” he said.

An equally important step would be for each government to be “transparent” about what surveillance they subject their citizens to, he said.

“Whatever governments decide to do, there should be a clear governance model and transparency around what they will do around privacy. At least then their citizens are in a position to understand and comment on what their government is doing.”