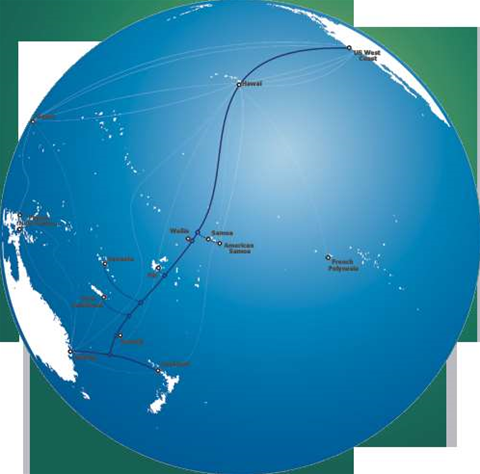 The New Zealand government today announced it has signed up for capacity on the trans-Pacific Hawaiki data communications cable, and will become an anchor tenant once the link is constructed.

Science and innovation minister Steven Joyce and communications and IT minister Amy Adams jointly announced the signing of the contract, which is worth NZ$65 million (A$60.5 million) over 25 years.

According to the ministers, REANNZ needs dedicated capacity to handle huge data volumes for scientists taking part in global research projects, such as the Large Hadron Collider and Argonne Leadership Computing Facility supercomputing project run by the US Department of Energy.

They declined to detail how much dedicated capacity the organisation needed.

REANNZ said it would initially have 20Gbps capacity on Hawaiki for its research institution members. This will rise to 100Gbps and more to meet demand, according to REANNZ chief executive Steve Cotter.

The 14,000km Hawaiki cable system, which will land in Sydney at the Equinix SY3 data centre to connect New Zealand, Australia and the West Coast of the United States - is expected to be in operation in two years' time.

The cable is being designed and constructed by TE Subcom, and has a budget of US$350 million.

So far, Australian providers iiNet and TPG have signed up for capacity on Hawaiki, as well as New Zealand ISP Voyager.