Can Michael Harte be Barclays' superhero? 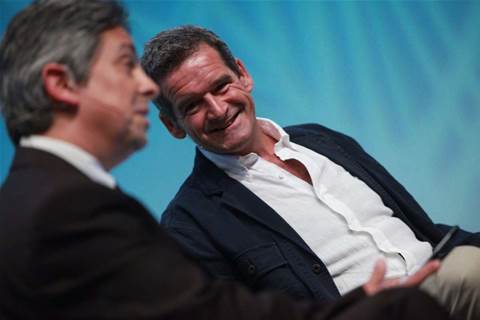 Come August, the Australian technology sector will wave goodbye to one of its most familiar faces when Commonwealth Bank CIO Michael Harte boards a plane to join Barclays Bank in the UK.

No-one can ever have had any doubt about the New Zealander’s ambition. The move sees him expand his staff from 6500 to 55,000, his customer base from 8.5 million to 33 million.

He will take on a second core banking overhaul, one that is set to dwarf CBAs $1.5 billion legacy systems replacement.

There are 33 million new account holders he can impact.

Harte vows that - despite the multi-million dollar paycheck and the one-time Mediterranean island - all he wants to do is make the world a better place.

Even for someone who has achieved as much as the CommBank CIO, this can seem like a lofty ambition for a technology executive. But in his swansong Sydney address yesterday, under the appropriately grand chandeliers of the Shangri-La ballroom, Harte made it clear that he aspires to be remembered for loftier achievements than turning CBA onto cloud computing and cutting 23 data centres to two.

“It is evident in financial services that we can help people have a better, more fruitful, longer life,” he said.

“If I can find out what a customer wants and needs today, I help them spend in the right way, to build up their savings, and then we can plan for their future.

“People are looking to fulfil their lives and fulfil their opportunities. We want to make it easier for them to make these hard and sophisticated decisions.”

For one of Australia’s most prominent technology leaders, Michael Harte doesn’t talk about technology much at all.

He muses on the sources of human enterprise, the day-to-day struggles of everyday Australians, corporate social responsibility and even makes a couple of jokes at the expense of a certain Australian telco - always guaranteed to get a crowd on side.

He repeats the mantra of structuring the business around the customer enough times that it almost becomes believable. It is clear that the customer is someone he feels a very close affinity with, far beyond the realm of marketing copy.

“Once upon a time we would have 700 outages that would affect some customer in some way - we have now got that down to about two,” he recalled.

"Why don’t you try to get money to your landlord and be unable to do it because you’ll find out how annoying it is and you’ll understand - through empathy - what it is like to be the customer.”

CommBank is not the only big financial institution now left scouring executive ranks for a new technology leader. Three out of the big four - CBA, ANZ and Westpac - currently have a vacancy at the top.

Staying firmly on-theme, Harte said the customer-centric vision has to be the number one criteria of the bank’s recruiters.

“I don’t know who the candidates are,” he insisted, “but I wish them well and I hope that they have realised at least that focusing on the customer is the most valuable thing you can do.”

“Everyone will go about that in their own way, but without the customer, you’re nothing.”

His checklist for sorting the true believers from the well-rehearsed pretenders is based on track record.

“The evidence is there if they have designed a data structure that is customer based, and if they’re changing all their business rules to be engaged with the customer rather than just managing the firm,” he said.

“If they’re just maintaining the systems of record - then they’re lost.”

Can a CIO make the world a better place?

Whether or not a CIO - even one with the self-confidence embodied by CommBank's 'celebrity CIO' - can reasonably aspire to make the world a better place is a matter we will leave to the water coolers of Darling Harbour’s glass-framed offices.

But one thing is for sure - Barclays could sure use a superhero right now.

In February news broke that the personal details of as many as 27,000 Barclays customers had been stolen and sold on the black market to financial scammers.

Harte understands how the impact of any adverse event reverberates through the community.

“The banking system is there for a very good reason,” he insists. “If you did all the calculations you would figure out that we create so much value by virtue of helping people get into their business and improve their position. But every now and then we stuff something up and it takes a decade to repair it.”

But Harte has what he calls “The Wisdom of Ralph” (Norris) up his sleeve, and plans to use it.

“I think that the wisdom of Ralph, and that customer centricity, serves us well,” he told iTnews. “I don’t want to sell generics like in healthcare where everyone gets an aspirin.”

All things going smoothly, Barclays should get at least five years out of Harte before he “hangs up his boots” for good.

“They are one year into their transformation, I predict it will take six. I reckon I have got about five years left in me minimum - but I might have to hang around for eight,” he said.

“I will be well and truly tired by then.”