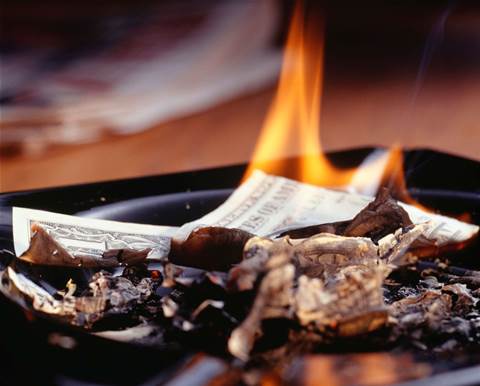 Minister says govt 'might as well have burnt the cash'.

The Northern Territory government has decided to cut its losses and forfeit the $70 million already spent on a whole-of-government asset management system, after an external review found it would cost another $120 million to complete.

Speaking in parliament this morning, Minister for Information Services and Liberal MP David Tollner said the territory “might as well have piled the cash up on the steps of parliament house and set it alight”.

He acknowledged the government's decision to turn its back on $70 million already spent “may seem a bold stroke” but defended it as “the right decision for Territorians”.

The doomed project started in 2006 as part of the then-Labor government's effort to replace nine ageing systems in use across the state.

A number of these systems were never switched off because the new SAP-based AMS was deemed not ready to go live right across the government, and now are facing the prospect of re-birth.

Today Tollner announced the government would remediate and integrate three of these systems instead of going ahead with the whole-of-government replacement.

The government plans to stabilise the systems – one of which was first built in the 1990s – and link them up using middleware.

“This middleware approach is increasingly being used by large organisations to enable the life of existing systems to be significantly extended, ensure the systems remain relevant to business requirements and avoid the huge capital cost and high risk of expensive system replacements,” Tollner said.

It is not the first time the NT government has considered reverting to the old systems - the propsect was raised by the Territory's Auditor-General in March 2013, who warned of the risks involved with relying on software with a limited lifespan.

“This option presents additional risks in that the residual life of the legacy systems is unknown, with the result that the acquisition of new systems may be inevitable if the existing system lives cannot be extended,” Auditor-General Frank McGuiness said at the time.

“That is why they were being replaced in the first place,” he said.

Tollner, however, told parliament he was confident the existing systems still had some spark left in them, and that his view is supported by “an experienced senior chief information officer from another state government” called in to review the situation.

“A technical review of these systems has found them to be robust, reliable and at current and contemporary versions of operating software”, he said, pending “some work...to be done to bring these systems to a level of currency”.

The Labor opposition hit back at Tollner’s attempts to apportion all of the blame for the IT scandal at its party’s feet, and raised doubts about the fast escalation of costs since it lost government in August 2012.

"The Auditor-General has found that a cost of $26 million had been incurred on the AMS project up to October 2012," Shadow Minister for Corporate and Information Services, Kon Vatskalis, told iTnews.

“The CLP Government is now claiming the total cost of the project is $70 million. This means that $44 million that was spent on this project occurred under the CLP Government’s watch."

“But it is disappointing that it was allowed to get to this stage,” he said.

He said he hoped Tollner and his government would seize the opportunity to use the stabilisation and remediation work to develop local skills within the Territory, lest it get itself stuck in the trap of being forced to fly in expensive labour once again.

“Not one project manager who worked on the AMS initiative is still working within the NT,” he said.

“If some skills aren’t available in the NT then the government should adopt a policy to develop them with local industry.”