The United States National Security Agency appears to be engaged in a massive malware disseminating campaign to infect computer systems and networks around the world, according to leaked top secret documents.

A PowerPoint presentation provided to The Intercept by Snowden purports to show how the NSA plans to spread malware on systems automatically, using the TURBINE system and fake Facebook servers, so as to infect millions of computers.

The spy agency utilises a large arsenal of imaginatively named malware to remotely control computers and to capture data from them, as well as to interrupt their operation:

By using malware deployed in network routers, the NSA may be able to access data passing through virtual private networks. The HAMMERSTEIN man in the middle malware appears to attack the Internet Key Exchange (IKE) phase used to set up secure VPN sessions, and attempts decryption of content. 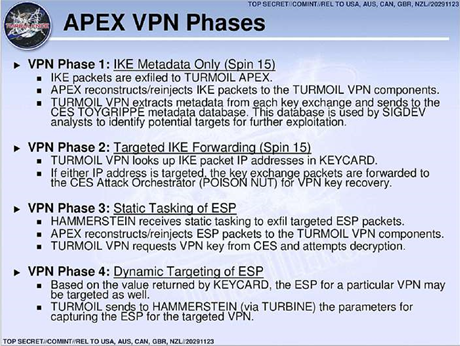 How the NSA Secretly Masqueraded as Facebook to Hack Computers for Surveillance.

According to the presentation, NSA exploits vulnerabilities in web browsers, the Oracle Java and Adobe Flash frameworks, and router software to infect devices. The malware is said to be able to hide itself from anti-virus programs and can delete itself after a set time if needed.

The NSA's favoured attack method to implant malware is the "man in the middle" (MITM) technique, whereby software is secretely placed on networks between computers communicating with each other. MITM allows multiple devices to be targeted and also makes it easier to capture the data they transmit.

The exact scale of NSA's malware dissemination campaign remains unknown as the US government refuses to provide detail on the operations, but the agency is believed to have successfully compromised as many as 100,000 systems around the world.

Digital liberties group the Centre for Democracy and Technology senior counsel Harley Geiger said "if this report is accurate, the NSA is acting like a spambot."

"The use of malware implants should be targeted against specific threats in tightly controlled situations, but this kind of mass automated surveillance would put countless Internet users at risk," Geiger said.

Australian and New Zealand intelligence agencies were privy to the information in the NSA presentation, along with their equivalents in Canada and Britain, and are believed to participate in the programme itself.