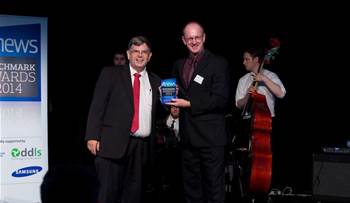 David Johnson, business director of Queensland Police’s ICT division has taken out the title of Government CIO of the Year at the iTnews Benchmark Awards, a result of his efforts to increase the efficiency and productivity of the state’s police force.

Under Johnson’s direction, the Queensland Police Service has embarked on a mobility strategy underpinned by the QLiTE application, built by the QPS’ internal IT team.

The app - running on 400 Apple devices to date - has the potential to transform the agency’s service delivery, with police officers now able to access three databases which could previously only be accessed by calling the base via a two-way radio or driving back to the station.

The initial 50-strong Apple device pilot has been expanded eightfold within weeks of the launch, and the state government is now studying Johnson’s business case for a wider rollout.

QliTE- which boasts an HTML5-based front-end user interface and web interfaces to the three QPS enterprise systems - allows cops on the beat to access information on persons and vehicles of interest, owner/driver details and more.

Johnson accepted the award in Melbourne last night, in front of several hundred of his peers attending the CIO Strategy Summit.

He thanked the Queensland Commissioner of Police for being supportive of his team's technology vision and understanding the positive effect it could have on the state's force.

"Thank you to the team that worked so hard to push through the barriers to make sure that we could deliver," he said. "One officer who said if I tried to take the device off him he'd use his gun and taser."