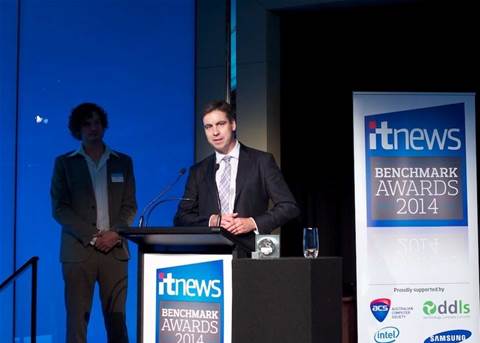 Former NSW Health CIO Greg Wells was named Healthcare CIO of the Year in Melbourne last night, in front of 160 of his peers attending the iTnews Benchmark Awards.

Wells was recognised for his work leading the establishment of NSW Health's HeatheNet platform, an application that interfaces between a multitude of hospital-based databases to automatically generate a simple, single portal for the clinician.

HealtheNet retrieves relevant data from any number of NSW health databases to a window tailored to each clinical specialty.

It also acts as the NSW health system’s gateway into the national Personally Controlled Electronic Health Record (PCEHR), with over 3000 NSW patient discharge summaries uploaded into the national system as of January.

HealtheNet stood out thanks to its focus on clinical usability, its ambitious scale, and its indisputable potential to improve health outcomes in NSW hospitals.

The success of a federally funded trial of HealtheNet has been recognised by the state government, which subsequently agreed to fund a system-wide roll-out. Other state government’s are also reported to be looking into adopting a version of the platform.

Well’s colleagues and peers have recognised his vision, foresight and his ability to inspire passion in others, as well as an uncanny knack for working through the administrative roadblocks threatening a major undertaking like HealtheNet.

Accepting the award at the Melbourne Grand Hyatt last night, Wells said the project had all the right ingredients at the right time.

A passionate advocate for e-health and its life saving potential during his three years at the helm of NSW Health IT Wells has now left the role to take up a contract helping to prepare the NSW Department of Family and Community Services for the roll-out of the NDIS.