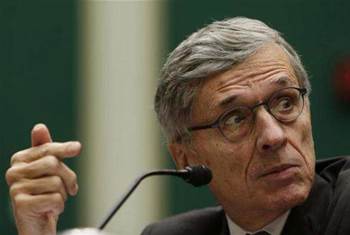 Next steps for net neutrality.

The top US communications regulator said on Tuesday he planned to set broad principles to guide how Internet service providers manage consumers' access to the Web and would pursue abuse or anti-competitiveness on a case-by-case basis.

"The Internet is evolving so rapidly that we want to look at case sets as well as generic concept rules, so that what we don't want to do is to say that somehow we're smarter than the net, because I can stipulate to that, we aren't," said Federal Communications Commission (FCC) chairman Tom Wheeler.

"Case-by-case is a dynamic approach rather than, 'well, everybody's got to go through the eye of this needle.' And that's how we look to approach this," Wheeler said at the State of the Net conference in Washington.

Two weeks ago a US appeals court struck down the FCC's so-called open Internet rules that required Internet services providers to give consumers equal access to any Web content or applications without restrictions or varied charges.

The ruling raised concerns among consumer advocates that it would start a practice among broadband providers, such as Verizon or Comcast, to charge content providers, such as Netflix, for faster Internet speeds to access their websites and services.

Verizon, which had brought the case to the court, and other large Internet providers have pledged not to restrict their customers' use of the web.

Verizon had argued that the FCC rules, passed in late 2010, represented government overreach into how they operate their networks.

Opponents of the rules also see them as government micro-managing of how the companies handle bandwidth-guzzling processes on their own networks.

The appeals court decision was the second time that the rules were struck down by the court, which on January 14 ruled the FCC had failed to show that it has a mandate to impose the anti-discrimination rules on broadband providers, although it reaffirmed the FCC's authority to regulate broadband access.

"I interpret what the court did as an invitation to us and that I intend to accept that invitation," Wheeler said on Tuesday. He has also said he was exploring all options, including an appeal.