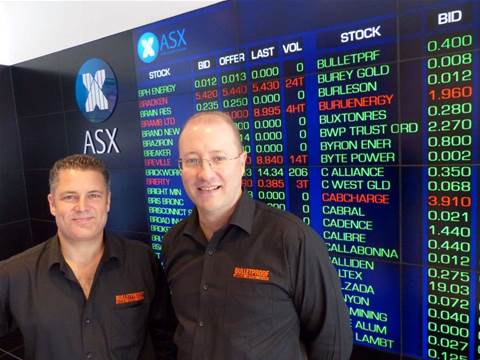 The reborn Bulletproof Networks will start trading as a new entity on the Australian Stock Exchange today, and has already booked three new major customer wins.

Spencer acquired all of Bulletproof’s shares and last week officially changed its name to Bulletproof Group Limited on the ASX. The transaction also involved a capital raising which, though initially set at $1.6 million, ended up at $2.8 million as a result of oversubscription.

Spencer, which lost $497,000 on revenue of $59,000 last financial year, will undergo the process of divesting its mining exploration interests over the next two financial halves.

The combined entity stopped trading in December at 34c a share and will re-list and resume trading as of 10am Thursday morning. It initially hoped to list on December 23 but was held up due to regulatory processes.

Its efforts appear to already be paying dividends.

Amazon Web Services announces its list of premier partners once a year. Bulletproof will be able to hold on to its single local AWS premier partner status until November when the new list is announced.

AWS currently has 22 premier partners worldwide, out of around 8000 consulting partners, Modesto said.

“Most of them are using [the services] for production front-end website hosting, as well as enterprise application hosting,” he said.

He said the listing of Bulletproof — which joins the likes of fellow locally listed hosting providers Melbourne IT and Macquarie Telecom -— was already proving attractive to large enterprises wanting the stability of a listed entity and the ability to do instant due diligence.

“Listing gives us the profile, the customers wanting to be a part of a listed entity, and the funds to accelerate growth and be in a position where — if we need to, — we can access a war chest for acquisitions if they make sense for investors and all concerned.”