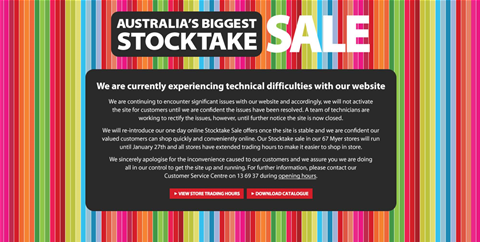 Online store expected to be down for a week.

Department store giant Myer is unlikely to be processing online transactions until 2014, as it battles to recover from a weeklong web site outage.

Myer has been unable to process online transactions since Christmas Day, impacting sales during one of its busiest trading periods - the annual stocktake sale on December 26 and 27.

Customers began reporting that the site was performing poorly and crashing during checkout late on Christmas Day, forcing the retailer’s IT team to take the site down. 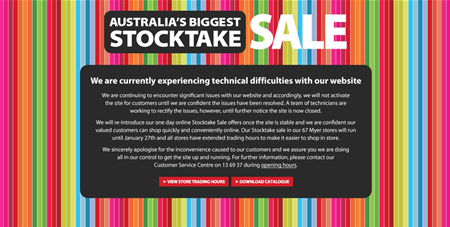 Thanks for the feedback about our site - our team are currently working to get it back up & running ASAP. Very sorry for the inconvenience.

The site has for the most part been offline since. Myer’s social media team  said the company “will not be activating the site for customers until we are confident the issues have been resolved.”

Myer chief executive Bernie Brookes told the Sydney Morning Herald that technicians from both IBM and Myer were "working furiously" to bring the site back online over the holiday period.

On Sunday afternoon, Myer’s social media team provided its eighth update to customers, informing them that online sales are unlikely to be available for some days yet.

Technicians have “identified the cause of the issues” and set about “implementing the fixes,” the company reported.

“We'll take a few days to test everything before we bring the website back up to make sure everything is working and stable. Once we're back up we'll have some extra special offers to thank everyone for their patience!”

iTnews has previously reported that Myer last updated its e-commerce site using IBM Websphere in late 2011, at a cost of some $9 million.