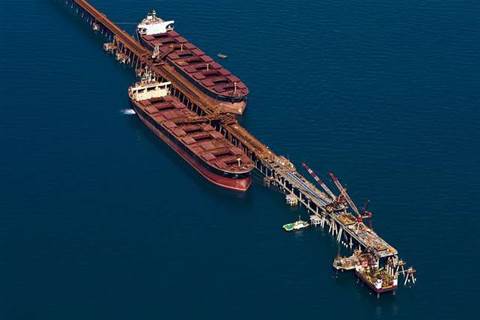 A bill of lading lays out contract terms between shipper and client for sea-freight transactions. It specifies the name of the captain of the ship, the port and destination of the ship, the goods, the consignee and freight rate.

The electronic bill of lading for BHP Billiton's iron ore cargo was drafted, approved, signed, issued to the shipper, presented to the confirming bank and passed to the issuing bank and onto the buyer in two days, unlike paper trades, which can take weeks.

"We support electronic bills of lading and have made good progress with all parties involved in the chain to build an infrastructure that supports electronic document execution," a BHP spokeswoman said.

Anglo-Australian miner Rio Tinto has also started to use other types of e-bills of lading.

Earlier this year Cargill completed the first grains deal using an electronic document, with the document transfer from the US to Mexico taking just 19 minutes.

With an array of costs that can include ship hire, on top of insurance, fuel and port fees, companies are keen to make savings by speeding up the logistical and administrative process to streamline invoicing and customs clearance.

"Bills of lading have been around for centuries, so inevitably there is a long history of law and commercial practice associated with them. As such it is bound to take time to change to a new system," said Charlotte Winter of law firm Norton Rose Fulbright.

"One of the reasons this is building momentum is you have particular trades that appear to be comfortable with electronic bills and significant parties in the market seem to be promoting their use."

ESS chief executive Alexander Goulandris said his firm was in talks with other trade houses and companies over the use of CargoDocs in grains and iron ore as well as other markets such as coal and coffee.

He said trade houses Louis Dreyfus and Noble Coffee were poised to use e-documents on coffee trades.

"Changes in the transport system have also led to a fragmentation of the market. This has led to operational headaches getting larger," he said.

CargoDocs was first offered in 2010 to the oil tanker market and is already used by majors including BP, Royal Dutch Shell and ConocoPhillips, ESS said, adding that it was based on a secure Internet-based system.

Smaller traders say it will take time for them to change as some cost-competitive banks offering trade finance still require paper documents.

"It seems a great idea and could probably roll out or be used by the big boys from Australia to China.

"I very much doubt it will be used on a wide scale in Africa for the next two years or so until major regional banks in the area also sign up," an Africa-focused iron ore trader said.

(Writing by Jonathan Saul; Editing by Will Waterman).