Meet the man anointed to save Bell Labs 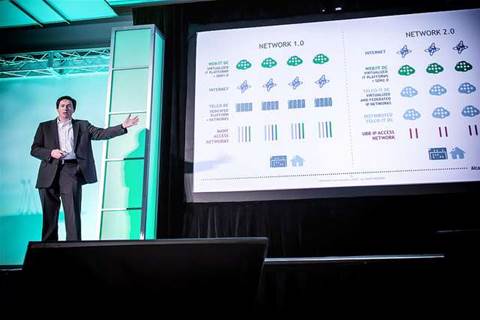 How he plans to resurrect the famed research firm.

Alcatel-Lucent CTO Marcus Weldon, the product executive now charged with also running the famed Bell Labs, is perplexed as to why he was chosen to manage an organisation with a heritage in fundamental research.

Bell Labs, formerly an arm of AT&T, has been credited with the invention of everything from the transistor to the laser to Unix and the C++ programming language. But under the watch of Alcatel Lucent, fundamental research around physics and semiconductors have been all but abandoned in the search for more profitable areas.

"I'll tell you what the thesis is," Weldon told iTnews, perched on a bar stool in the foyer of a New Jersey hotel about 18 kilometres east of Bell Labs' Murray Hill headquarters.

"The thesis is this is the right time to have the vision piece — which is CTO — combined with the research piece. Frankly that's the way it was always constructed in the great eras [of Bell Labs]."

While he's presided over Bell Labs for just a matter of weeks, Weldon is confident he can restore the organisation to its former glory on his watch.

"I'm incredibly optimistic that this is the next great era of Bell Labs," he says. "It's a little bit arrogant to state that, but on the other hand I wouldn't have taken the job if I didn't believe it were true."

If Weldon can reinvigorate Bell Labs, he'll have to do it without restoring the staffing levels of bygone eras. But that, he says, isn't of particular concern.

"People always ask how many staff are in Bell Labs; [they say] 'Well it's a third of what it used to be, therefore it's a third as good as it was'," Weldon says. "I will say this — numerics don't really matter".

One reason they don't matter, according to Weldon, is the limited pool of candidates that fit Bell Labs' ideal research personality type.

The quintessential Bell Labs researcher, he explains, is someone who solves the problem in front of them but also sees that "the offshoot of that problem [is] the answer to something else".

"It takes a certain type of person to not just solve that problem but see on the side you've discovered something that is completely different," Weldon says.

"That isn't a numerically significant number of people. If you thought about the number of geniuses in the world who you would ideally like to have, it might be a thousand. If you take a [Steve] Jobs-like person, you might only have 100 of them".

Alcatel-Lucent CEO, Michel Combes, told a symposium in New Jersey last month that the high-level vision is to realign Bell Labs' research activities with the product roadmap of Alcatel-Lucent.

The challenge will be to do so without stifling innovation at Bell Labs.

Weldon believes the interests of researchers and lines-of-business can be aligned.

One way Weldon plans to achieve this is by sharing Alcatel-Lucent's "vision" with researchers more regularly; as CTO he believes he is well-placed to articulate the challenges of the company and the industries it serves.

Then, according to Weldon, it's a matter of making sure that researchers are solving problems "that need to be solved in the industry". He uses so-called 5G as an example. Researchers, he says, should focus on the "problem" of achieving a 100-fold increase in wireless capacity, not on "solving the 5G problem".

Weldon expects he will have to make some hard decisions as he takes the reins at Bell Labs.

"When we look at how all the things align, I'm sure we're going to find a few gaps," he says.

"I am sure I will find that some of the research projects have ... legacy value, is probably the kindest way to put it, and we will flip those [around]."

There would also be some "re-hiring of fresh talent" to kick off new research projects that align with Alcatel-Lucent's needs.

"Not everything can come from Bell Labs," Combes said.

"Bell Labs isn't the be-all and end-all of innovation," he says. "It would be ridiculous to think that Bell Labs is going to actually produce more than say 30 percent of the innovation that we need in terms of disruptive innovation because it's simply 700 people versus millions of innovators worldwide".

According to Weldon, "the idea that you are only part of the answer is the important concept for researchers".

Though "real invention or inspiration" was an individualistic — rather than group-based — activity, innovation today is often a "combination of [inventive] pieces that come together to produce something that has remarkable power".