Sterrenberg calm in the face of an uphill battle 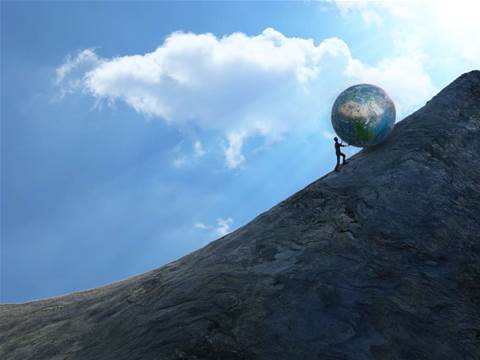 Human Services CIO Gary Sterrenberg speaks with an impossible calm about the ageing systems he is responsible for, including one that administers more than $500 million worth of essential payments to Australia’s most vulnerable citizens each day.

That system was built on technology implemented by the department before the technology veteran had even finished university.

He has found himself having to explain to a new government staunchly committed to a ‘budget emergency’ why it should spend tens – if not hundreds – of millions of dollars to replace the system, which for all intents and purposes appears to be working fine.

Sterrenberg's demeanour is such that it all feels part of a well-concieved plan - a plan that aims to deliver online services that will satisfy a demanding modern citizen who refuses to tolerate anything other than instant and pain-free electronic gratification.

You can take the CIO out of the bank...

Sterrenberg has been CIO at the DHS for just over two years after four years in the banking sector at ANZ and NAB.

It is clear, however, that he still benchmarks himself against the finance sector in terms of performance.

Over the past 12 months his team has successfully slashed the rate of outages affecting the department’s online services by about 80 percent, from 249 in the second half of 2011-12 to 49 in the equivalent period of 2012-13, which means its performance is “probably in line with the banks”.

He has achieved this by upgrading IBM DB2 and Oracle databases to their latest versions and balancing risk between the department’s various electronic channels.

“We are de-risking our operations by splitting the mobile and online platforms. If there are any disruptions affecting one platform then customers are still able to access our services via the other," he told iTnews.

“Our online systems run off several servers linked together in a virtualised environment, which we are running across two data centres on an active/active basis.

“Then there is a separate infrastructure stack to allow the mobile layer to be operationally separate across the two data centres,” he said.

In many ways the DHS shares a common purpose with the banks of Sterrenberg’s past. Both essentially exist to ensure that people have the money they are entitled to when and where they need it.

Accordingly, Sterrenberg has his eyes on the same sort of real-time functionality that bank customers desire for their transactions. To achieve this, however, requires a major overhaul of the Income Support Integrated System (ISIS), a complex tool that Centrelink has used to calculate and administer social welfare payments for nearly 30 years.

The kind of project nightmares are made of?

DHS received just over $16 million in the last federal budget for the replacement or upgrade of ISIS. That was just for the business case, which Sterrenberg and his team are now in the process of selling to new human services minister Marise Payne.

There is no hurry, however, Sterrenberg insists.

He speaks about the workhorse system like an old friend, and one he holds in high esteem.

“It's a soldier. The ISIS system has been a trusted servant of our social welfare program over the past 25 to 30 years.

“A lot of people call it legacy,” he says with warm laugh cutting through his refined South African diction. “I prefer to call it heritage.”

Still, he wants to modernise the system to make it “a little bit more agile” in order to respond to growing community expectations.

With ISIS running acceptably for the time being, Sterrenberg plans to go about the upgrade in a smart and steady manner, hopefully avoiding some of the knee-jerk shortcuts that have famously derailed other projects on this scale.

One of the decisions he is not rushing is whether or not to migrate off the department’s 1983 Model 204 database, which supports ISIS.

DHS’s ten-year, $98.5 million licensing deal with vendor Computer Corporation of America (CCA) expires in June next year, but Sterrenberg says that the department does not necessarily have to move to new software in order to realise his vision.

“Most systems built in that era didn’t have referential integrity. Modern systems like IBM and Oracle have that as a natural mechanism for accessing databases and it is a normal part of COTS [commercial off the shelf] products released today, including, I’m sure, the new version of M204,” he said.

“I think the process for us would be to have a look at the market again.

“But I will be looking at whatever solution can service the business needs that we have... if we could get a new version from the same company, that would be one of the options we will be looking at,” he said.

The Department of Human Services spends more than $830 million on IT in a year, but remarkably it is a collection of mobile apps built on the smell of an oily rag that is garnering all of the attention.

The Express Plus apps suite allow families, job seekers, students, and seniors to carry out their Centrelink transactions on their mobiles. A Medicare app allows users to claim back health fees.

The apps, Sterrenberg recently told the Gartner Symposium Conference, have been downloaded by some 1.4 million Australians.

Sterrenberg hinted that a “personal passion” meant he hoped disability services might be the next area targeted.

“I want to crack this one. Watch this space,” he told the conference delegates.

But the consummate professional stopped short of confirming any concrete plans.

“We are always making sure that we are trying to improve our services to people with a disability,” he said.