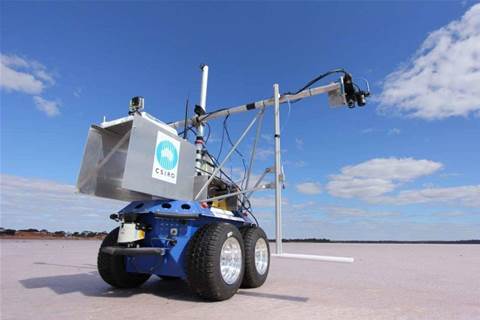 Robots living autonomously in the desert could eventually increase the accuracy and reliability of satellite monitoring.

The CSIRO has successfully conducted a trial of its ‘outback rover’, an autonomous robot on wheels that it is using to calibrate overhead passing satellites out on a giant salt lake in outback Western Australia.

“One of the basic problems with flying satellites is that you have to constantly compare the data they are collecting with what is actually happening on the ground,” the CSIRO’s robotics chief Dr Alberto Elfes explained to iTnews.

The implications of radically improved satellite accuracy thanks to this sort of technology could be huge for the agricultural, environmental and mining industries.

“For example there are some varieties of pest that can change the colour of crops that they have infected. Only a well calibrated satellite could detect that change,” Elfes said.

“Satellite data is also used to assess pollution in rivers, lakes and oceans, but it has to be very accurate to pick up the subtle colour changes. A well-calibrated satellite has the potential to not only identify pollution plumes but also track them back to where they originated.”

This sort of calibration is normally done by teams of three to five scientists, wandering around the desert with hand held measurement devices called spectrometers as satellites travel overhead. Large, flat and uniform outback sites like WA’s Lake Lefroy are favoured as they can be easily picked up by satellite cameras where a single pixel may represent spaces 250x250 metres in size.

Not only does the outback rover trial offer an alternative to this labour and travel-intensive activity, it also has the potential to increase the amount of data collected by magnitudes.

At the moment however, the outback robot is just a prototype and is in demand for use in other scientific pursuits being run by the CSIRO, so at this stage Elfes and his team doesn’t have the option of leaving it on location for long periods.

The important thing, Elfes said, is that they have proven the rover’s ability to stream video and data in real time back to its masters in Brisbane.

“We have demonstrated this capability. Now we are having internal discussions about the value of this and taking the capability forward,” he said, adding that there had already been a lot of interest in the project form agricultural organisations.

The next challenge will be to ensure the machine’s autonomy and durability to remain in the location for long periods, something Elfes, who spent ten years working for NASA’s Jet Propulsion Laboratory, said was eminently possible.

“We could have robot out there all the time using a solar panels to charge its batteries. It would autonomously consult a database tracking satellite movement so it would know when one was passing over and could go out and collect data and the return itself to a shed or under a tree in the meantime,” he said.