TPG to build fibre to the basement 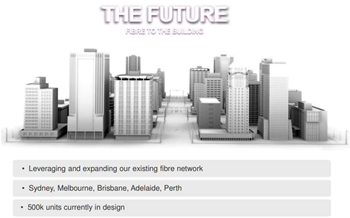 TPG plans to roll out fibre to the basements of an extra 500,000 apartments across five Australian cities, in a move mimicking the Coalition’s plans for the national broadband network.

TPG announced today in its financial year 2013 results presentation that it will target metropolitan Sydney, Melbourne, Adelaide, Brisbane and Perth initially in an effort to expand the number of buildings connected to its existing fibre network.

It claimed the service will offer download speeds up to 100 megabits per second. Plans will cost $69.99 a month over a 24 month contract, excluding a $129.99 setup fee.

The announcement comes as the new Federal Government prepares to the review the rollout of the country’s national broadband network.

The Coalition is planning to implement a fibre-to-the-basement rollout for apartment buildings. Once fibre is attached to a point within the block, copper would then be run into individual apartments.

The Coalition’s overall NBN strategy is to implement fibre-to-the-node over the Labor Government’s fibre-to-the-premise model, encouraging customers to pay for the last mile to be connected straight into their premise.

TPG reported a 64 percent rise in net profit for the full year 13 to $149.2 million. It attributed the growth to 76,000 new broadband customers signed up over the period.