Is Hyperloop the future of ground transport? 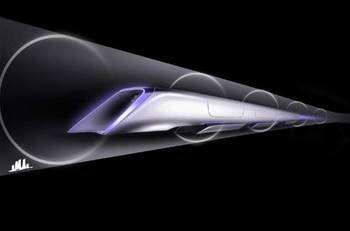 Opinion: A novel use of off-the-shelf technology.

Elon Musk, founder of SpaceX and co-founder of PayPal, this week announced his vision for a new high-speed ground transportation system called “Hyperloop”.

The system would connect Los Angeles to San Francisco and, compared to the high-speed train link under development, it could provide a more efficient, reliable, low-cost and green(er) alternative.

Beyond the technological aspects and the project’s feasibility, this announcement is crucial to the current and future developments of high-speed land transport systems meant for mass use.

While the technologies needed to develop the Hyperloop are not new, it is the first time that a proposed system looks at combining them in a plausible way.

In what is becoming Musk’s style, the Hyperloop tries to solve a known issue with simplicity and style.

Designed around customer needs, it claims to provide an alternative choice that is relatively cheap (US$6 billion to build and operate vs US$70 billion for high-speed rail), fast (bringing the commuting time to 30 minutes between the two cities), environmentally friendly (with limited land use, noise and emissions footprint) and, most importantly, safe. The Hyperloop goes one better than previous systems proposed by others (such as the RAND corporation and ET3), by not relying on a tube held in a state of vacuum (pretty much impossible over 350 miles) but instead using a low pressure system that is easier to construct and maintain.

Also, by classing Hyperloop as an “open design concept” and releasing a preliminary design, Musk has ensured that the people who would be most affected by such a system are able to gauge the advantages for themselves.

The scientific community can collaborate by scrutinising the technical aspects and offering suggestions and feedback.

High-speed rail links can be an efficient and fast way to travel, and introduction of new lines can affect the growth of the aviation industry on certain sectors or routes.

But the overall cost of development, the system’s environmental impact and safety concerns about top-speed limits often make it difficult to justify new developments. Concept sketch. You can see the air intake on the nose of the capsule. Credit: SpaceX

All open air systems face a simple problem: air resistance or drag. If we consider MagLev, which is the fastest unconventional rail system (one that uses electromagnetic forces of attraction or repulsion to levitate and propel an object, like the Transrapid-09 or the Shanghai line), even it faces a lot of drag at high speeds.

The drag forces quadruple as the velocity of the object doubles, to overcome that drag force it needs eight times the power to increase its speed. Thus drag limits the top speed for ground-based open air systems.

Hyperloop has been designed to overcome this. By operating in a low-pressure environment that allows for lower air density the system limits the amount of drag it would face to begin with.

This coupled with the compressor leading face allows the Hyperloop to channel the air in front of the capsule and funnel it to the back to generate extra thrust.

Riding on an air cushion, with minimal drag, the Hyperloop would in theory also allow for variable top-speeds depending on the capsule configuration. Future interstate developments could see it compete with road and rail in the transport market.

Is it worth it?

For its price, the Hyperloop is definitely worth exploring. Its simplicity in design and Elon Musk’s reputation of finding innovative and (relatively) inexpensive solutions to big problems are certainly appealing.

The idea offers an alternative to current day systems that are limited either by design or fundamental physics. It also illustrates how one can use current off-the-shelf technology to design a new system that can be safe, reliable, commercially affordable and a cheaper alternative for the end user.

Drawing on the expertise of his teams at SpaceX and Tesla Motors, Musk has taken on another grand challenge. Having provided an alternative to space, road and now high-speed rail transport, who knows, in years to come we might even see Musk’s vision for supersonic air travel.