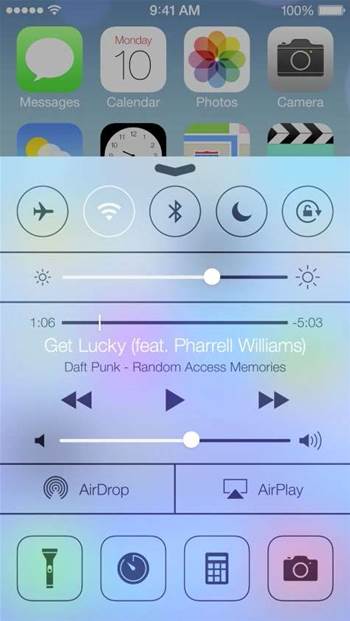 Opinion: As long as there is patent law, Apple will be in courts.

Earlier this month, Apple announced iOS 7, the most recent incarnation of its operating system for mobile and portable devices. According to Apple:

iOS 7 is completely redesigned with subtle motion, an elegant color palette and distinct, functional layers that make it feel more alive. The typography has been refined for a cleaner, simpler look, and the use of translucency and motion makes even simple tasks more engaging. iOS 7 has hundreds of great new features, including Control Center, Notification Center, improved Multitasking, AirDrop, enhanced Photos, Safari, Siri and introduces iTunes Radio, a free Internet radio service based on the music you listen to on iTunes.

But with tens of thousands patents filed around the world – and a plethora of resulting lawsuits – how do iOS 7’s “complete redesign” and “hundreds of great new features” avoid stepping on other companies' toes?

Staying on the right side of the law

Patents provide inventors (and investors) with legal protection for a finite number of years. That protection allows the patent holder to commercialise an invention and thereby offers an incentive for innovation.

Some patents, such those relating to mobile phones, computers and bread slicers, have been fabulously successful. They have benefited the patent holder and society alike. Others, such as patents for flying cars, are curiosities.

The cost of protecting innovation through patents varies from industry to industry. It encompasses lawyers and technology specialists who draft patent applications, seeking the maximum protection without infringing someone else’s patent.

It includes competitors who study approved patents looking for weaknesses in the protection – chinks in the patentee’s armour.

It also encompasses taking an alleged infringer to court or defending a claim of infringement, upwards of US$1.2 million. High technology businesses often employ hundreds of patent lawyers, inhouse or in boutique and corporate law firms. That spending is rational and typically a small fraction of dollars spent on marketing.

Apple’s iOS 7 software has not yet appeared in court, and indeed may not do so. The software is being promoted as the basis for the next generation of Apple devices and services, in particular the delivery of services via the Cloud. There hasn’t been a comprehensive public inventory but we can assume that much of iOS 7 is protected by patents. Protection covers how the software operates, for example what happens when you press a button or scroll across a screen.

Much Apple hardware is also protected by patents, along with protection under designs law (the appearance of devices) and trademark law (the names and logos which embody billions in goodwill attributable to innovation, service and clever marketing). In an “information economy” enterprises seek to wrap the code, the plastic and the metal in patents. Competitors and some public advocacy groups correspondingly seek to unwrap the protection.

Some advocates have echoed US arguments about innovation and incentives, suggesting a century after patents were primarily concerned with devices such as bread slicers, ploughs, munitions, toys and corsets we need to recognise that different markets have different characteristics.

It might be appropriate for example to give short-term protection for some mechanical devices and much longer protection for pharmaceuticals, on the basis that the resources required for developing new drugs are very large and that a short period of protection may preclude an “adequate” return on investment and thereby serve as a disincentive for research.

One rejoinder has been that “big pharma” overall has been quite profitable and inadequate returns are attributable to poor management (and practices such as pharma payola) rather than inadequate law.

Where does this leave Apple iOS 7?

An optimist might say Apple is unassailable and will correctly accrue the rewards of brilliant design and substantial investment. A realist would demur, and point to the long history of patent disputes involving Microsoft, Apple and other leading enterprises. (Research organisations such as CSIRO are not immune from the pain.)

A salient example is the long-running dispute between Apple and Samsung, played out very expensively in Australian courts. The same dispute was played out, on occasion with quite different results, in overseas courts. That’s a reminder that although markets are increasingly global, patent law and competition law remain local.

We can expect to see Apple in the courts for as long as there is patent law. That’s inevitable in a world where intangibles such as patents have value, where there are disagreements about interpretation of particular patents and where judges sort out problems. Think of patent disputes as business as usual, rather than one-off patent wars, and if you are a lawyer look forward to the next exciting episode.

Bruce Baer Arnold does not work for, consult to, own shares in or receive funding from any company or organisation that would benefit from this article, and has no relevant affiliations.