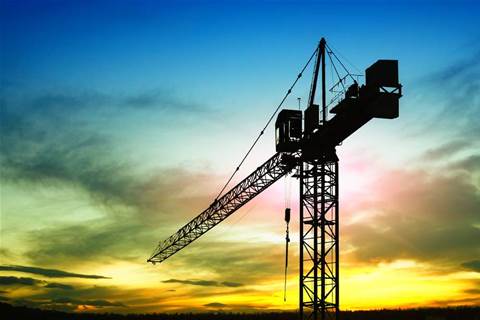 Swings into line of sight between microwave towers.

A major construction crane has emerged as the latest unusual source of radio interference after it blocked the line of sight between two Optus microwave backhaul towers in central Queensland.

It is understood the tower crane, which is being used for construction works at Rockhampton Hospital, came between the microwave towers while in 'weathervane' mode.

The mode allows the crane, when it is not in use, to rotate with the wind, thus presenting the minimum surface area to the wind. It is used to mitigate risks to the structure in windy conditions.

The downside for Optus is the crane's jib — its horizontal working arm — swung in and out of the line of sight of the microwave towers, causing intermittent packet loss on the route.

The towers are used as backhaul for the Optus mobile network. The area still uses microwave because it is a network gateway to the Whitsunday Islands, which rely on the transmission technology.

Optus attempted to negotiate an end to weathervaning but it is understood that posed a potential OH&S risk for the building site.

It is also understood the carrier considered another microwave link between the Rockhampton and Yeppoon towers, to alter the line of sight.

However, a spokesperson for the carrier told iTnews a fibre link had ultimately been in planning to replace the microwave link between Rockhampton and Yeppoon, and that the crane issues had forced Optus to expedite the fibre rollout.

The fibre link was meant to be switched on late last week but was delayed until yesterday, according to the Optus spokesperson.

Further movements by the crane between Friday last week and Wednesday this week resulted in a fresh round of mobile coverage issues, with the crane's jib remaining within the line of sight for progressively longer periods of time.

"We had a problem with the switch over to fibre which was delayed," the Optus spokesperson said. "In normal circumstances this would be OK but the crane kept interfering [with the microwave transmission path]."

The fibre-optic path between Rockhampton and Yeppoon is now live, ameliorating the issue.

The crane is the second unusual source of radio interference highlighted by Australia's mobile carriers this month.

Earlier in June, Telstra revealed a rogue beer fridge had been causing mobile network problems for it in regional Victoria.