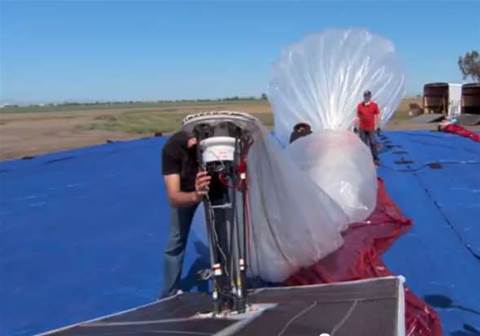 Innovative network to come to Australia in mid-2014.

Google is piloting a mesh network of high-altitude balloons in the skies above New Zealand that it hopes will eventually carry reliable internet services to all corners of the globe.

The web giant unveiled Project Loon on Saturday, having launched 30 balloons into the skies above the Canterbury region in New Zealand this week.

The solar-powered balloons, each about 15 metres in diameter, carry an almost 10kg payload of antennas, computers, batteries and navigation equipment, according to a report by Wired.

"If we didn't filter out the other signals, the technology just wouldn't work."

Users on the ground are given a spherical red antenna that is attached to their homes and communicates with the mesh network. The network also relays data to and from a ground station, which acts as a point of interconnection for a local ISP, according to a video posted by Google.

The NZ pilot project will see 50 testers try to connect to the so-called "balloon-powered internet".

The technology will be trialled in Australia in about mid-2014, "possibly in Tasmania", according to a report by The Age.

Although it is early days, Google expects its mesh network to be capable of internet speeds consistent with current 3G networks, at minimum.

One of the most novel features of the network is the way it proposes to control the balloons once they are launched into the stratosphere, about 20 km above the earth's surface.

Google wants to have a "ring of balloons, flying around the globe" to power its internet network. It has found a way to increase and decrease the altitude of balloons to take advantage of various wind directions.

"The stratosphere is different because we tend to have layers of wind that go in very particular directions," DeVaul said.

"By moving up and down between these different layers, we can steer. So by catching the right winds, we can keep the balloons together enough to get good coverage on the ground."

The company is still working on how it can apply this to a fleet of balloons "so that each balloon is in the area you want it right when you need it".

"We're solving this with some complex algorithms and lots of computing power," project lead Mike Cassidy said in a blog post.