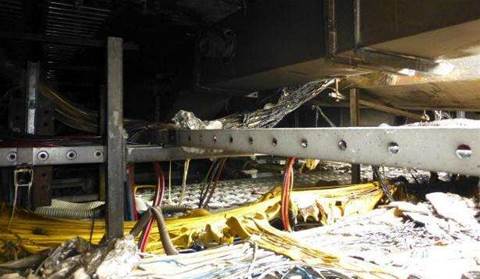 Few 'lessons learnt' for carriers, many for communities.

A fire in Telstra's Warrnambool exchange late last year is now expected to cost the carrier in excess of $20 million, more than twice the amount reported in March.

The costing is contained in the Federal Government's long-awaited report (pdf) into the incident, which ultimately attributes little blame to the carrier over the incident and the outages and disruption it caused to telecommunications services.

"The overall cost to Telstra, including the restoration costs, lost revenue, ongoing liabilities, reputational damage and capital investment, is likely to exceed $20 million," the report stated.

Telstra told iTnews in March that it would spend over $10 million restoring the damaged exchange, which caught fire on November 22 last year.

Telstra's own investigation of the incident resulted in 22 recommendations, which the carrier is working to implement.

The Government's investigation, which focused on "what lessons can be learnt", focused mostly on disaster recovery and business continuity planning by residents and businesses in the area.

Among the few "suggested actions" that would directly affect Telstra or any other telco in a future repeat situation, the Government recommended that carriers should have systems that allow "for the provision of interim mobile broadband services for the community e.g. local wireless broadband access hubs (i.e. Wi-Fi)".

Telstra deployed its cell-on-wheels (COW) trailers in the Warrnambool area to get some mobile voice services back online, but the aim was not specifically to re-enable mobile internet services.

The other major recommendation to emerge was for the Government to assist in the creation of "best practice" for communicating a major outage — and its restoration — to affected residents and businesses.

Many of those affected had complained to the Federal inquiry about being "forgotten" in the restoration process, and Telstra has acknowledged in its own investigation that its communication strategy needed work.

Many "suggested actions" from the Federal inquiry put the onus on residents, businesses and particularly "community service providers" to better prepare business continuity plans in case of any future catastrophic telecommunications outage.

It was also suggested that residents purchase "low-cost" mobile handsets so they have an emergency calling option in case fixed services cut out.

"Individuals without a mobile phone who are concerned about access to Triple Zero during a prolonged telecommunications outage could consider purchasing a low cost mobile phone with a charger to keep at home for use during such outages," the Government suggested.

"Since mobile phones do not require SIM cards to make emergency calls ('000' and '112'), there will be no ongoing costs."

NBN not the solution

The Government briefly touched on whether the architecture of the NBN would be any more resilient than Telstra to a major fire incident; the conclusion, ultimately, was no.

"Significant disruptions to services may result if damage occurs to key points of the network," it said.

"This is true for any telecommunications network.