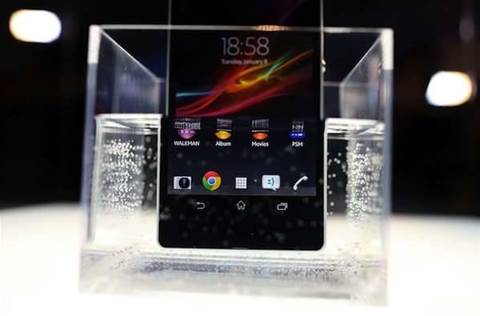 Not your everyday phone.

It’s not every day that you use a smartphone in heavy rain without a care, but the Sony Xperia Z is not an everyday phone.

The Xperia Z is Sony’s current flagship android smartphone featuring IP55/IP57 dust and water resistance with toughened glass on the front and back.

While the inside of the phone and battery are protected because the body of the phone is sealed, all the flaps on the outside ports (SIM, headphone, USB charger etc) have to be properly closed to attain water and dust protection. Cleverly the Xperia Z can detect when one or more flaps are open and reminds you to close them.

In late February 2013 Telstra announced it was beginning to augment its 1800MHz 4G network to enable additional network coverage using 900Mhz 4G spectrum that would “better cater for increasing mobile use in regional areas”.

The Sony Xperia Z is one of the few high-end smartphones available at the moment that supports the lower frequency 900Mhz 4G spectrum band which improves signal range and depth.

Andy Volard, director of device management at Telstra told iTNews the Sony Xperia Z had earned Telstra’s Blue Tick coverage rating. This means it was tested and found to provide “superior handheld coverage in regional and rural areas on the Telstra Mobile Network”. This makes it a good choice for business customers who need to be contactable outside of Australia’s more populous cities and states.

Curiously when we received the Xperia Z review phone from Sony and factory software reset it, the phone defaulted to 3G data speeds after rebooting. We had to dive into the phone Settings, select Wireless & networks, more..., Mobile networks, Network mode and manually enable 4G data access by choosing LTE (preferred)/WCDMA/GSM.

In terms of physical characteristics the Xperia Z feels more stylish and tough than the Samsung Galaxy S4 which also sports a 5 inch 1920 x 1080 Full HD screen, but has a non-premium plastic feel to it.

The Xperia Z’s 2400Mah capacity battery is sufficient to last a whole day for light to medium users of mobile data but heavy users may require a recharge by the end of the day.

Sony’s smart software power management features may fix that issue because after a period of inactivity a message appears on the screen pointing out ways that you can increase standby time. The most effective of these are to disable mobile data when the screen is off and automatically turn wifi on/off based on your location, so the phone isn’t constantly searching for a wifi access point.

The Xperia Z’s in-call quality was clear however the speakerphone was not very loud.

The 13.1 megapixel camera took good photos of notes and documents but was even better with the flash turned on.

Speed is not an issue when switching between lots of apps as the Xperia Z’s 2GB  RAM and 1.5GHz quad-core processor handle multitasking with ease. The 16GB onboard storage had about 11.5GB free after we had installed our apps, this can be expanded by slotting in a microSD card with up to 32GB capacity.

Overall we thought Sony's software layer on the Xperia Z was very helpful, perhaps the best interface and usability of the current batch of high-end smartphones.

One example of this is the ease of use of the keyboard. Pressing the magic wand button on the software keyboard lets users choose between different keyboard layouts, three levels of autocorrect, enable bilingual word support, various buttons including Google voice to text dictation, and whether the key presses should have sound or vibration feedback.

The Sony Xperia Z is available in black, white or purple from Telstra if you sign up to a plan starting from $63/month, or directly from Sony for $629 plus delivery.

Suitable for use in heavy rain and remote locations, the Xperia Z does software well, feels tougher than the Galaxy S4 and can handle multitasking with ease.