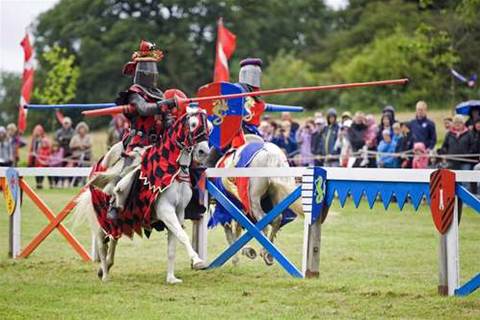 Communications Minister Stephen Conroy and his opposite Malcolm Turnbull are again trading barbs over the National Broadband Network, this time over the amount of government equity committed to the project.

Turnbull kicked off the latest stoush by comparing the Government's planned investment in the NBN in the Mid-year Economic and Fiscal Outlook (MYEFO), released late January, and yesterday's Budget 2013-14.

The Opposition communications spokesman claimed Labor had "cut its planned equity investment in the NBN between this financial year and 2014-15 by $3.5 billion, or 20 percent".

He said the "cut" was proof of rollout delays and would mean further rollout targets would not be met.

Conroy blasted the claims as "hysterical" and "false".

"The facts are NBN Co's equity is appropriated each year and then drawn down as required," he said.

"In the current financial year, equity requirements were less than anticipated, reflecting the reforecast rollout schedule.

"The Budget reconfirms the total government equity contributions to NBN Co will be up to $30.4 billion."

Turnbull later stood by his conclusions and accused Conroy of being "given to wild remarks".

Analysis of the figures by iTnews shows they have shifted regularly since at least May 2011, when they were broken out in the 2011-12 Budget.

Moreover, if the 2011-12 equity numbers are used as a baseline, drawdowns by NBN Co to date are actually $1.1 billion off what was originally anticipated.

This is because a large portion of rollout work — and hence equity drawdown — was committed to 2014-15 in October last year. This is not shown in Turnbull's numbers.

The trend in equity drawn down by NBN Co is expected to increase beyond 2014-15.

Yesterday's Budget also gives the first indication of expected equity to be drawn down by NBN Co in 2016-17.