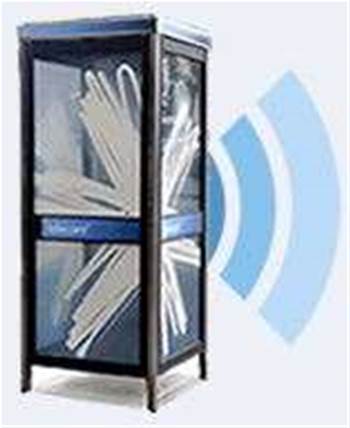 Booths and all project.

Telecom New Zealand intends to carry on equipping its phone booths with Wi-Fi, after a pilot project over the summer months concluded.

A TNZ spokesperson told iTNews the trial allowed people with smartphones and other Wi-Fi equipped devices to connect to the phone booth hotspots, and use them for data access. Trials were conducted in popular tourist areas such as Queenstown in the south island and surf beaches around the country, the spokesperson said.

Some 150 phone booths have been equipped with Wi-Fi and the service is free for up to five devices per user, from one registered mobile phone number, with a one gigabyte a day data cap.

Users connect to a Wi-Fi hotspot and are sent a text message to authenticate devices for the network.

Telecom hopes phone booth Wi-Fi will be attractive as a marketing and communications tool to attract users and shoppers to city centre areas, and is pursuing this strategy commercially.

“Like many operators around the world, we see Wi-Fi moving beyond simply hotspots and becoming a standard radio access network technology that customers like, want and value,” said Philip Ivanier, who heads the telco's Labs and Strategic Partnering department.

According to Ivanier, the Wi-Fi offloads some of the burden on Telecom's cellular data network, by siphoning off traffic from it.

Tourists can also avoid crippling data roaming charges for their smartphones by connecting to the Wi-Fi access points, Ivanier said.

Telecom has some 3,000 phone booths across New Zealand and its supplier, US-based Ruckus Wireless will now continue to equip more payphone kiosks which will use DSL or ADSL data backhaul for the wireless traffic.

The access points used for the trial are 2.4 and 5GHz dual-band ones, with 802.11n protocol support that provide 300 megabits per second per radio. Thanks to beam-forming and quality of service technology, the access points can support twenty concurrent voice calls and a hundred simultaneous data users.

User data throughput is guaranteed at 20 megabits per second over 100 metres line-of sight.

Some of the usage for the Wi-Fi access points include offloading large data traffic from telco 3G networks, as well as building multimedia hotspots, Ruckus said.

Separate from the phone booth trial, Telecom has since 2005 operated a Wi-Fi hotspot prepaid service around the country. This is charged at NZ$9.95 (A$8.25) per hour, with a maximum data cap of 120 megabytes.