NBN Co plan to fast-track users onto fibre in doubt 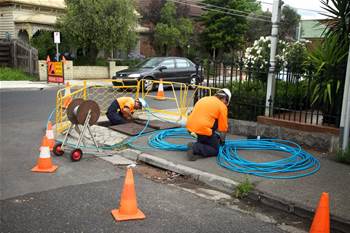 NBN Co is facing a setback to its plan to open 82 partially-complete fibre areas to retail services, after failing to win the support of major ISP customers.

The network builder shed light on the plan on Monday, after it was first touted in an ambiguous alteration to Telstra's migration plan earlier this month.

NBN Co said the plan would allow end-users to connect to the fibre network sooner, but ISPs Optus, iiNet and AAPT either don't buy it or have reserved judgment pending a better explanation of why it's necessary.

AAPT did not back the plan partially over concerns that it appeared to benefit Telstra over other NBN access seekers.

"In contrast,. it is unclear what the advantage would be to wholesale customers who have been planning on the basis of the current process and existing FSAMs [fibre serving access modules] and therefore unlikely to be in a position to take advantage of the proposed amendment in the same way that Telstra will be".

Optus raised concerns that the change "appears to remove the requirement for NBN Co to publish on its website the 'Ready for Service' date" for the 82 rollout regions. (pdf)

The telco number two said it did not "understand the rationale" for the change and requested "further clarity ... [and] a valid reason" for the plan.

iiNet largely reserved judgment on the plan, on the basis that it "is not entirely clear" why the proposal "would allow NBN Co to begin providing services in those rollout regions any faster", and that it also isn't clear how the 82 proposed regions had been identified. (pdf)

However, it did make several observations.

It noted the plan cut the notice that ISPs had of an area becoming ready for retail services. Currently, NBN Co must provide advance notice when retail services can begin.

iiNet is also concerned the plan would allow NBN Co to declare a fibre area as being ready for retail services "before NBN Co is able to provide fibre services to any premises, or any significant number of premises, in that rollout region".

"iiNet acknowledges that this issue may be theoretical only but without knowing what the criteria was for selecting the [82 fibre areas], iiNet is unable to be certain this issue is theoretical or real."

The ISP also backed AAPT's view that the plan could result in equivalence issues.