Apple user? You'll be one for life 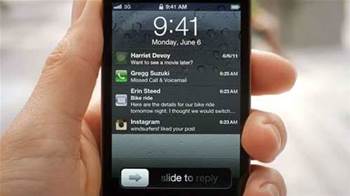 Apple customers are customers for life, thanks to a clause in the company’s terms and conditions requiring a death certificate before an account can be terminated.

An Apple account and associated data can only be closed once Apple has sighted a death certificate for the user.

Features within an Apple account, such as iCloud, can be terminated, but as stated in the ‘no right to survivorship’ clause in Apple’s iCloud terms and conditions, a death certificate is required to terminate an account.

An Apple spokesperson confirmed the policy but said users generally didn’t want to delete their account due to personal and purchased data stored on it.

She said customers could request Apple cancel their ID, but the company would first suggest the customer remove their personal information.

"It's easy to change your Apple ID, password, or defatul shipping and payment information. Most Apple ID accounts remain open so that customers can access the content that they have purchased."

Apple did not provide information on how long it stored customer data once an account had been wiped or deleted. In its terms and conditions Apple states it will delete the data associated with an account “after a period of time”.

One source told iTnews that upon contacting Apple to delete his account, he was informed closures were on a case-by-case basis. He was pushed to simply delete the account’s data and retain the ID instead.

He was told he would require a death certificate to cancel his account. And rather than close his Apple ID, he was advised that it was easier to somply enter junk data for personal details.

Facebook users can request to have their account permanently deleted, with a two week cooling off period in case of a change of heart. Users are also offered the opportunity to download a copy of all their data from Facebook.

All personally identifiable information is removed from Facebook’s database within about a month. But some data may remain in backup copies and logs for up to 90 days, according to Facebook’s Data Use Policy.

“Copies of some material (photos, notes, etc.) may remain in our servers for technical reasons, but this material is disassociated from any personal identifiers and completely inaccessible to other users. Facebook also does not use content associated with accounts that have been deactivated or deleted."

The social network also offers users the ability to deactivate an account, saving data but temporarily suspending the account.

Google allows a user to delete their account relatively simply and also offers the ability to download data before terminating the account, via its ‘data liberation’ feature.

Google’s terms and conditions state residual copies of user data could take 30 days to be deleted from active servers, and may remain in backup for 60 days.

Ex-Google users can retrieve a deleted account for a few weeks after termination.

“If you delete your Gmail address but wish to have it back, we work to help you recover your deleted accounts whenever possible,” Google states.

“However, within a few weeks' time, accounts are usually no longer retrievable. Note that a successful recovery will only recover the username associated with the account.”