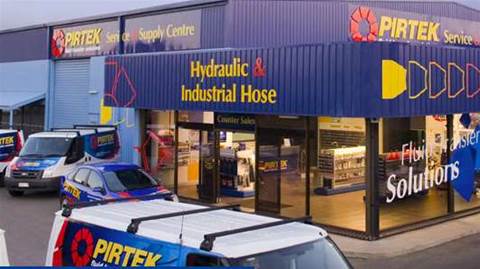 Industrial and hydraulic hose firm Pirtek has begun implementing a new hosted enterprise resource planning system that it hopes will provide a step change in capability for the burgeoning global business.

Headquartered in Australia, Pirtek has franchised operations in 13 countries. It specialises in hoses and connectors for industrial and hydraulic machinery.

Franchisees run fleets of service vehicles to fix broken-down machinery on customer sites. The trucks are a familiar sight in industrial parks across Australia.

Dormor told iTnews the company initiated an ERP review about a year ago involving "a couple of key franchisees".

"It was a point of looking at where our current package was heading and what was some of the functionality we wanted to look at moving [to] in the future," he said.

In keeping with a franchised business model, Pirtek aims to keep the IT systems served to its worldwide operations "as common as we can", Dormor said.

"A lot of these international sites are either smaller structurally or are new in those regions, so their current IT structure is very limited, so a lot of the support is done through us here [in Australia]."

Aside from timezone issues, operating overseas meant harmonising the ERP system with local tax laws and other legal requirements.

"That's where we hit some pain points with our current provider being more of an Australian-focused package," Dormor said.

"We would have to go through a lot of customisation and understanding of what those local requirements were, rather than having an established ERP package that already had those localisations sorted."

Pirtek was also keen to introduce more field service automation, particularly with the aid of mobile devices, and an upgraded analytics and reporting capability.

"Our [franchised service and supply] centres are becoming more IT savvy," Dormor said.

"Each centre has its own capabilities, [and] we are getting more and more requests [from centres] to look at their own data different ways."

Pirtek will use the next six to nine months to create a pilot "Pirtek model" using the Syteline system that can be replicated across its franchise network.

"These next couple of months are strictly looking at how the ins and outs of Syteline works, then developing business rules around functionality we are going to use from day one, then building this model around what our Pirtek centres will use as a group," Dormor said.

"Being a franchised organisation, we do want to create a model. There might be some slight [regional] variance, but at the end of the day we're not trying to have people go off in different ways. We are trying to standardise.

"[The] key [is] to make a Pirtek model that fits not only with our Australian business here, but also in South Africa, Singapore, China, Canada and the like."

Beyond building a pilot model, plans for the rollout of Syteline are still being determined.

"Our plan, which hasn't been nailed yet, is to potentially have our head office and a couple of franchisees go live, and then a pretty rapid rollout of franchisees ... until we complete the process," Dormor said.

Pirtek is also simultaneously looking at data mapping to the new system.

"From a master file point of view, we'll obviously map and take as much data as we can, and we feel quite comfortable doing that," Dormor said.

"From a historical sense, we're not going to try and load a lot of historical data [into Syteline]. We will make a clean cut."

Syteline will be hosted from servers in an Interactive data centre. Pirtek's current ERP, Micronet, is hosted by Macquarie Telecom.

Pirtek already uses Interactive for hardware maintenance, though in the ERP instance, will deal with the host via Infor.

"Obviously, having a common model we want to work out where we're having success in certain areas and how we can then pass that knowledge down to our other areas, franchisees, new people — whoever that may be," he said.

"We want to spread that good practice with good data."