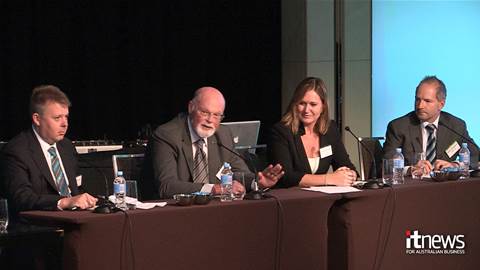 Could the election year be an impetus for more sharing?

Australia’s public service lacks the will to embrace shared services, despite the cost savings and simplification it can deliver, according to former Defence CIO Greg Farr.

Speaking to an audience of his peers ahead of yesterday’s iTnews Benchmark Awards, Farr said Defence had “ended up sort of half pregnant” under previous attempts.

Farr added that shared services could work - especially at the lowest layers of infrastructure and for some applications. But he wasn’t sure whether there was a will at the highest levels of the public service for it.

“I think quite frankly secretaries and agencies like playing in their own bailiwick,” Farr said.

Farr was last night awarded Government CIO of the Year for a project that aims to consolidate some 280 computer rooms down to 10 key facilities. It has already resulted in the decommissioning of Defence's legacy data centre in Canberra.

Nominated for DEEWR's shared workflow system, Monkley told the audience she felt there would be a need for greater collaboration and consolidation in IT across government, particularly in an election year.

“Every time we have to go through a portfolio change it is a massive effort, it drains resources, it means you not only have to devote your attention to that but also running the business at the same time,” Monkley said.

That pressure highlighted the need for commonality and sharing across government, she said.

“I think there is more opportunity to have a successful shared services element - but maybe not in traditional moulds," she said.

Farr said individual business owners would still want to do things their own way, but there were still savings to be made in consolidation, simplification and standardisation.

“If the case is built out, I think it can work - provided we don't try and cut down totally the flexibility that business owners genuinely need to run their business.”