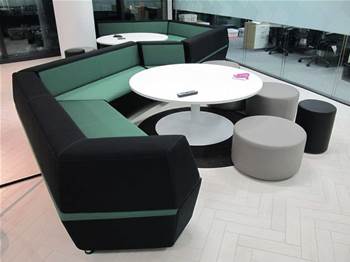 Australian organisations have taken to Activity-Based Working with gusto, with one in three planning to remove the binds that tie employees to their desks in the next few years.

But is Activity-Based Working (ABW) a fad, a cost-saver or a better way to work?

Activity-Based Working broadly refers to work environments where employees come to collaborate on projects in shared spaces rather than sitting at pre-assigned desks.

“Activity-based working was firstly implemented in the Netherlands more than 15 years ago,” explains Veldhoen and Company ANZ partner, Luc Kamperman.

Veldhoen and Company has been one of the leading advocates of ABW in both the Netherlands and Australia, providing consulting services to Macquarie Bank and CommBank, among others

“It has become mainstream in the last eight years,” Kamperman predicted. “I predict that in five years’ time, one in two organisations will be considering this new way of working.

“This ability to work anywhere, anytime begs the question: what is the office for? Why would we invest heavily in a central office? Could the office support our work activities in a better way?

“The primary function of an office is shifting from a processing factory to a place where we collaborate and learn. In essence we all know already what activity-based working is because we use different parts of our home for different activities.”

The next iteration of hot-desking

While early adopters energetically espouse the benefits of this new approach to work, there are still many that view it as a nothing more than a trendy architectural fad, a cynical attempt to save money by reducing the floor space available to each employee or just another way of describing the well-established practice of hot desking.

By definition, ABW is not hot desking. Hot desking essentially means that staff have an assigned desk, but now have to share it.  Activity-Based Working, by contrast, does away with all notion of owning your own desk and the hierarchy this infers in a workplace, in order to help staff  focus on the task at hand. It allows staff to choose where they want to work to produce the desired outcome.

The question of whether ABW is an architectural design fad, meanwhile, is harder to dispel. Even if it is, it has made a lasting and generally positive impact on both the look of several of Australia’s newest office buildings and the way people work within them.

Which leaves only the frequently-asserted claim that ABW adopters have adopted the trend just to save money on floor space.

Kamperman freely acknowledges that this is a common driver.

“In itself, this is not a bad thing, but it is dangerous if it is the primary driver.”

Technology should equally not be the key driver, he said.

“Technology is merely the enabler,” he said. “An organisation's vision, working culture and leadership should be the driver of what we want to do with the multiple opportunities new technologies bring to us.”

Accelerating IT and Business Alignment

Perth-based Bankwest adopted ABW en masse after moving into new headquarters in the first half of 2012.

The bank had previously conducted a one-year pilot in its previous home at Bankwest Tower, as had its parent company, the Commonwealth Bank.

Moving to an ABW approach at Bankwest Place enabled the bank to consolidate five offices into 13 floors in one newly decked out building.

Ed Cortis, Bankwest’s head of solution delivery, said a reduction in the number of employees per square metre wasn’t the main driver for the bank.

“In every single piece of documentation that Bankwest has produced on this it, is the last thing that is mentioned,” Cortis said. “Yes, of course it is lovely to enjoy that saving. But no doubt that wasn’t the driving reason.”

More important was the need to become an employer of choice and improve its talent management performance in the Perth economy, where the resources boom has resulted in a mismatch between supply and demand of talented staff.

Added to this was a desire for improved collaboration within teams and across the business, something that traditional office designs rarely provide - even with the advent of IT collaboration and social media tools.

ABW is, Cortis says, a boon for the IT department on this front. It not only allows staff to interact much more regularly and closely with a variety of colleagues from all parts of the business – and thus accelerates efforts to align IT with business goals – it also brings different IT roles closer together.

“We are still young in this, we’ve been doing it for six months,” Cortis said. “I see colleagues still sitting in the same spot and I’d like to see some more circulation. But we certainly see a lot more business people [mixing with IT]. The building is an enabler of that.

“We are also had some success implementing continuous delivery in some of our areas and I don’t think we would have been able to achieve that if I hadn’t been able to get all the operations staff, business analysts, testers and developers all sitting together and working together without friction,” he said.

“ABW has enabled me to do that. Speaking as head of solution delivery, that is fundamental to me and my strategy for the coming year – pushing continuous delivery across as many of our applications as we can and shifting code into production on a far more regular basis. If our ops guys were sitting in some dark building at the other end of town, that would be hard.”

However, one of the initial challenges the team faced was in locating their staff across the 13 floors as they have the flexibility to sit where they like on any given day. To overcome this challenge, Bankwest developed an internal application called “Locate myColleague”.

Cortis highlighted that the app isn’t being used to revert to the “bums on seats” management approach where managers need to physically see their staff to validate they are doing their jobs – something which runs counter to the culture of trust, flexibility and outcomes-centred accountability that ABW strives for. Instead, it is being used to help speed up collaboration and bring people together.

For the technology used to support the ABW program, Bankwest standardised on Dell notebooks with docking stations and monitors on each desk. When an employee docks their notebook they will also have their portable phone extension automatically logged in to the Cisco video phones.

The bank also uses the VMware View client virtualisation solution and Good Technology mobile device management (MDM). The 2700 employees use follow-me printing and the bank aims to eventually be a paper-independent office, although paper-based documents are still occasionally used.

While the bank is happy with the program, it is nonetheless evaluating a bring your own device program, has started to adopt Android-based devices and will upgrade the desktop standard operating environment from Windows XP to Windows 8.

“We are still evolving our way forward,” Cortis said. “One of our aspirations in our coming 12 months is to get closer to our customer and ABW will help us do that. We will push harder into dev ops and continuous delivery and ABW enables that.”

Read on to learn how Ernst and Young and other companies are embracing the ABW vision...

A 2012 survey by Colliers International found that one in three organisations were planning to implement ABW.

Ernst & Young recently signed a new lease for offices in Sydney and will join its peers KPMG and PWC in adopting the new work style.

"Our intention for 200 George St is to move to an activity based working style for those areas of our business where it is appropriate,” an Ernst & Young spokesperson told iTnews. “However, it is still early days, as we have only just signed the lease agreement for our new office."

Arup is another firm that has already completed an ABW pilot that now intends to adopt the approach more broadly this year before potentially going full steam in a new office in 2015.

“Our engineers work on numerous project teams at the same time and the individuals within those teams may be different, so being able to pick up and move quickly and easily allows greater co-ordination of project documents and better delivery outcomes for our clients.

“One of the great successes of the pilot was the introduction of the concentration space. The individual freedom to move away from the generic open-plan environment and focus on an immediate task is appreciated and regularly used. I know that this will be well received in further uptake.”

Heather said collaboration between IT and the business units was critical to solving issues before the ABW launch. The firm did not have to factor in additional IT budget – except for some laptops – as they already had most of the technology like wireless connectivity, follow-me printing, document collaboration and so forth in place.

“When asking staff to make a large-scale change such as this, any barrier will immediately create a negative reaction,” she said. “You want all interactions with technology in the ABW environment to be positive and if your IT department is not willing to invest time and energy, this would be very difficult to achieve.”