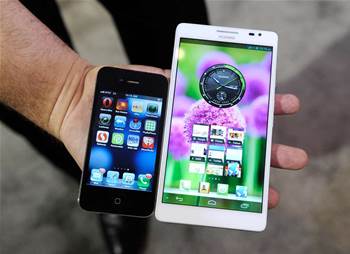 Touch GUI's, fat smartphones and electric cars on the horizon.

Larger screens, touch and gesture UI's and electric cars were strong themes at this year's Consumer Electronics Show (CES), which concluded over the weekend.

This year's CES was the largest in the show's 45+ year history, with some 3,250 exhibitors crammed into the Las Vegas Convention Centre in Nevada to showcase more than 20,000 new products.

Based on what we saw from the showroom floor, here are a few consumer technology predictions for 2013.

Touch-based user interfaces will continue to dominate consumer technology in 2013, if CES is anything to go by.

Intel announced that all future Ultrabook laptops would come with touchscreen displays.

While Microsoft kept its distance from this year's CES, plenty of third-party Windows 8 products were in evidence on the showroom floor. Naturally, all of them boasted touch-functionality.

The 'phablet' form-factor, somewhere between a smartphone and tablet, is expected to pick up plenty of traction in 2013.

At this year's CES, new phablet devices were shown off by Samsung, Sony, ZTE, Lenovo, Huawei and Vizio; with plenty more waiting in the pipeline.

While the concept of a phone/tablet hybrid has been around since at least 2010, consumer interest has received a significant shot in the arm courtesy of Samsung's Galaxy Note range.

To date, the original Note has sold more than ten million units worldwide, with the recently released Galaxy Note 2 not too far behind.

"We expect 2013 to be the Year of the Phablet," claimed  Neil Mawston, executive director of Strategy Analytics.

"The Galaxy Note was launched when four-inch smartphones had become commonplace, so the leap to five-inch [is] no longer such a chasm."

According to financial services firm Barclays, the phablet market is expected to quadruple in value over the next three years to $US135 billion ($A128.4 billion).

Based on what we saw at CES, the phablet craze wont be going anywhere. Nor will the form factor be limited to the 'premium' market: Kogan Technologies announced a budget five-inch phablet at the show priced at just $A149.

The CES exhibit hall showed off a veritible fleet of electric automobiles: including new cars from Ford, Daimler AG, Lexus and Audi.

According to market research and consulting group Pike Research, ﻿hybrid and electric car sales are expected to leap 40 percent this year, while general car sales would only increase by two percent.

This reversal in fortunes can be attributed to recent technological advances that remove or minimise many of the performance issues that concerned prospective customers.

Once maligned for their lack of horsepower, the modern electric car has now emerged as a viable racecar: at this year's CES Audi showed off its R18 e-tron quattro hybrid, which won the 24 hours of Le Mans race in 2012. An electric powered Rolls Royce was also unveiled at the event.

With 3D failing to catch the imagination (or wallets) of consumers, television manufacturers needed something new to show off at this year's CES: and they found it in 4K TV.

Although it made its debut at CES 2012, 4K (AKA 'Ultra HD') technology enjoyed a much bigger presence at this year's show. 4K TV provides a native resolution that is approximately four times greater than current 1080p displays or Blu-ray movies.

Crucially, Sony announced a 4K video distribution service at CES which will offer native 4K content from Sony Pictures and other partners.

Although analysts are in agreement that 4K TV is unlikely to take off in 2013 (due to a prohibitive price and a lack of readily available content), the technology is worth keeping an eye on.

The continued rise of Samsung

There was no getting away from Samsung Electronics at CES 2013: in addition to having one of the biggest booths at the show, the company was also responsible for many of the most talked-about products.

On day two and three of CES, tweets referring to Samsung announcements or products comfortably outpaced every other exhibitor at the show.

Last quarter, Samsung reported record net profits of $5.97 billion; with its Galaxy smartphone range contributing much of the success. The vendor is expecting continued earnings growth across its smartphone, TV, display panel, component and semiconductor businesses in 2013.

Got a news tip for our journalists? Share it with us anonymously here.
Copyright © CRN Australia. All rights reserved.
Tags:
hardware