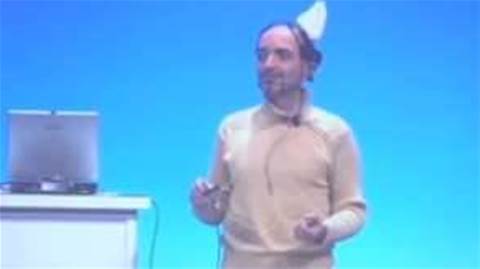 Coming to an office near you?

A phone app that screens calls based on the intended recipient's brain activity has landed one developer a $US30,000 ($A28,531) cash prize for his 30 hours of work.

The app, called 'Good Times', was created by Ruggero Scorcioni at US carrier AT&T's hackathon in Las Vegas, which finished up Monday Australian time.

Good Times uses a partially hacked Necomimi Brainwave headset to read the user's brain activity. Scorcioni was among 100 developers to get the device free simply by turning up to the AT&T event.

"I had to chop one ear off just to see what's inside," Scorcioni said.

"Then, I had to look everywhere even to find a soldering iron and screwdrivers. It's a hackathon, and a solution had to be found."

Other hardware pieces integrated with Necomimi include an Arduino microcontroller and "a small circuit containing a 3G radio chip and a SIM chip", according to a report by Computerworld US.

Brainwave data collected by the Necomimi sensor is transmitted over AT&T's data network. It passes through a hosted call management system, for which an API was made available on an alpha or beta basis.

The API is underpinned by technology from Voxeo Labs and Ericsson.

"All my calls are now filtered based on my real-time mental state by the Call Management API," Scorcioni said.

He successfully demonstrated the system by having someone call his mobile phone while he made the pitch presentation to judges and other developers. The incoming call routed to voicemail.

There was no official word on whether Good Times would be commercialised. Scorcioni told Computerworld he was just excited to take out first prize.

However, digital agency Freestyle Media, which also attended the hackathon, noted that "we may actually see this app implemented soon".

"It is a very innovative use of technology," the agency said. "[The] concept was completely spontaneous."

Prior to the conclusion of the hackathon, AT&T was most interested in the potential for the Call Management API to untie "customers' existing mobile numbers [from] a single device".

"It is designed to make it easy for developers to add real-time, voice and text communications to web and mobile apps," the carrier's chief marketing officer David Christopher said.

A number of other APIs were released by AT&T under its developer program.