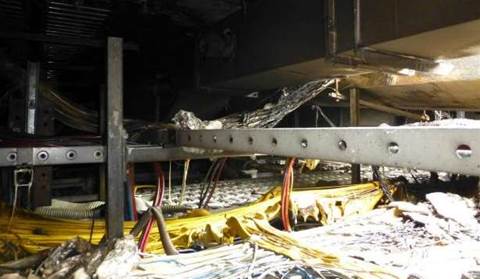 Telstra has set up its South Melbourne exchange as the temporary "parent" for 11 sub-exchanges located up to 260 kilometres away as part of recovery efforts from last week's Warrnambool exchange fire.

Country Wide area general manager Bill Mundy told iTnews that South Melbourne had been chosen because it was the closest exchange with enough spare capacity to handle the network load displaced by last Thursday's fire at the Warrnambool exchange.

Before the fire, Warrnambool acted as a "parent" exchange to nearby sub-exchanges in Telstra's network architecture. Sub-exchanges service homes located too far from Telstra's main exchange.

"We've gone through a process of effectively what we call reparenting the 'children' exchanges with our South Melbourne exchange, so all of the data records that relate to those 'children' need to be loaded into the switch in South Melbourne," Mundy said.

"That's an ongoing process at the moment.

"Furthermore, what we also had to do was build new transmission paths to facilitate the ability for South Melbourne exchange to be a parent to all of the smaller rural exchanges."

Works are continuing to re-parent sub-exchanges for another two towns — Hamilton and Portland — using the same method.

Telstra technicians have been working around the clock since the early morning fire to reinstate services for Victoria's south-west. The fire knocked out services for more than 60,000 users.

Mundy said there were about 50 technicians onsite "at any one time".

"The restoration is part of our standard 3+3+3 disaster recovery processes," he said.

"Basically what that means is after a disaster, we look to establish mobile communication ... as well as trying to get data services up so that we can get businesses back online.

"Then, within three weeks, we're looking to try and have all services restored. That's temporarily — doesn't matter what it is, just get service up, get it working and get them stable.

"And then within three months we're looking to have everything back to as per usual, all equipment replaced etc."

Mundy noted that while Telstra gave itself three weeks to institute a temporary fix in any disaster, it wasn't a hard-and-fast guide on how long it would take in this instance.

"I'm not saying its going to take us three weeks [for Warrnambool]," he said.

The carrier is already tracking strongly with landline restoration, with 19,000 currently reconnected through the damaged Warrnambool exchange.

Priority lines for essential services, retirement homes, schools and businesses are being reconnected through Telstra's Mobile Exchanges on Wheels (MEOWs). Two are operating in Warrnambool and a third MEOW is in transit from its usual base in Queensland.

"We then run a tie line cable from the MEOW through a window [of the damaged exchange] along the floor and to the MDF [main distribution frame]," Mundy said.

Mundy noted that the MDF had been largely spared by the fire, allowing the MEOWs to be hooked in directly.

"[It sustained] very little damage, if any," he said. "It was only soot and smoke damage to the MDF".

DSLAMs and transmission equipment, however, did not fare so well, sustaining extensive smoke and soot damage, Mundy said.

The cause of the fire is still under investigation by the Country Fire Authority.

Telstra said yesterday that "mobile service has now been restored to more than 80 percent of the impacted area."