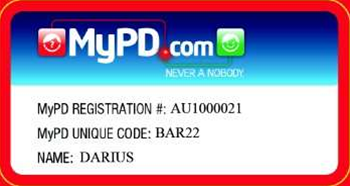 Called My Personal Details (MyPD), the information stored in the database will be identifying details of individuals as well as family and emergency contacts for them.

The founder of MyPD, Kathleen Kenny, told iTnews that on basic medical information such as medications required, if the person is a diabetes sufferer, allergies to antibiotics and similar data can also be recorded.

Registering with MyPD is free and people can either print out with their details for free, or buy $9.95 member kits with cards, stickers and tags.

No other government or private agencies or organisations can access it, Kenny said, adding that people can delete their accounts at any time, and erase their data.

Kenny points out that the service is not just for Australians. It is also targeted at visitors to Australia who may be required to register with MyPD as part of their visa applications.

"Anyone can be in the database," Kenny said, giving as an example a recent case in Queensland with five foreign nationals being rescued by helicopter and hospitalised.

"They had no ID at all on them," Kenny said, making it difficult to contact their families and friends.

Kenny said the service shouldn't be seen as identity card service. "At the end of the day, MyPD is only useful in case of emergencies, and not for anyone else," Kenny said.

According to Kenny, MyPD is also to be extended overseas. She would not divulge which countries are interested in the service, but said it will be rolled out worldwide.

Kenny said MyPD is looking at a solution for more durable forms of identity records than cards.

Asked if it would be in embeddable RFID chips or similar Kenny said the company is "several steps ahead of that," but provided no further details.

MyPD is supported by the 000 services, the NSW Ambulance Service, and the Department of Broadband, Communications and Digital Economy.

The company has also agreed to abide by the Internet Industry Association's Approved Vendor Trust Marque strict code of conduct for going about its business on the Internet.