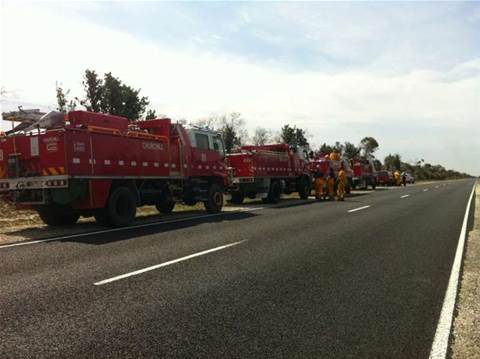 Knocks out fixed and mobile services.

Telstra is investigating the cause of a fire in its Warrnambool exchange in south-western Victoria that has knocked out fixed and mobile voice and internet services for up to 60,000 users.

A spokesman for the carrier, James Howe, told radio station 3AW that the fire broke out about 4.30am on Thursday, with technicians only able to get their first look at the damage from 8am.

Victoria's Country Fire Authority said five crews had fought the flames and that it had taken 1.5 hours to bring the fire under control.

"The exchange sustained around 60 percent damage," the authority said. "The cause of the fire will be investigated." 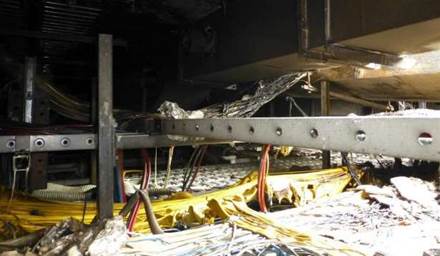 (Fire-damaged cable runs in the exchange. Photo courtesy of Telstra_News)

It could take "a number of days" for services to be restored, Howe told 3AW.

"A number of communication technicians are onsite and an assessment of the damage is underway," Telstra said on its network status page.

"We have a team of experts who will work around the clock monitoring our network and co-coordinating our restoration efforts to connect all of our customers again as quickly as possible."

The Standard carried a number of photos of the damage to the exchange, showing part of the building's roof missing.

The fire has hit services provided by Telstra, Optus and many large internet service providers, as well as banking services such as ATMs.

Optus reported on Twitter that fixed line services in Warrnambool are "currently unavailable", without providing an estimate of when services would be restored.

ISP Internode noted that "ADSL and NodeLine services across multiple exchanges, in the Warrnambool area of Victoria, may be unavailable", with similarly no restoration indication.

Fellow ISP (and parent company) iiNet indicated that services could be restored by Friday November 23 at 4pm WST (7pm AEDT), though this appeared optimistic.

"Structural engineers are now onsite assessing the integrity of Warrnambool exchange in conjuction with emergency services personnel," iiNet noted in a technical advisory.

"Techs have managed to gain access to some areas of the building."

Telstra noted via its Twitter account that it had sent several portable exchanges to the site to provide some temporary coverage.

"2xSatCOW just arrived at Melb Airport, being driven to #Warrnambool providing the township with mobile service ASAP," the carrier noted at 5pm AEDT on Thursday.

Telstra noted its technicians were "working to restore power" late into the night.

Telstra said it had managed to get 2G sites working at Edenhope, Coleraine and Port Fairy.

Update, 23/11 7.30am: Telstra has restored mobile phone services to Hamilton, and 3G services to Dartmore, Coleraine and Mt Clay. The exchange has been "made weatherproof" and mains power has also been restored.

Update, 12.10pm: Mobile services have been restored to Port Campbell, and 2G services were on at Stonehaven. Community meetings are to be held in various towns at 2pm AEDT.

Update 3.14pm: Telstra has released a photo gallery of the damage that the exchange sustained.