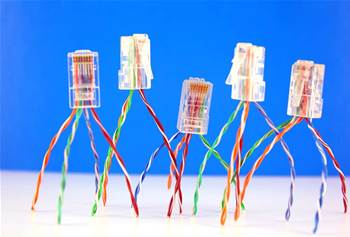 Lays out projected costs, then redacts the lot.

Telstra has shifted gears in its fight to stop Naked DSL being mandated as a wholesale service, turning to projected system costs and interference investigation data to dissuade the competition watchdog.

The carrier has provided a supplementary submission to the Australian Competition and Consumer Commission's wholesale ADSL inquiry. (pdf)

Although much of the document attempts to correct alleged errors in rival telcos' submissions, Telstra also attempts to lay out fresh evidence to have the bid for a mandated wholesale Naked DSL service quashed.

The carrier has turned over raw data on "interference investigation requests" that it believes support its contention that Naked DSL would introduce too many network faults.

Interference investigation requests cover a spectrum of DSL faults and require a technician to attend and rectify.

The figures table the number of interference investigation requests on the unconditioned local loop service (ULLS, which is used to underpin Naked services offered by other ISPs) versus those for the line sharing service (LSS, which Telstra contends is less problematic).

"This is a significant difference."

"Telstra expects that these charges will be passed on to end users by their service provider," the carrier noted.

"Furthermore, prior to requesting an interference investigation, Telstra requires its Wholesale customers to carry out extensive testing of their own equipment to ensure that the fault does not lie there, which only adds to the time that the end user is experiencing an issue with their Naked DSL service.

"While it is difficult to forecast the demand for a Naked WDSL service – if such a service was to be mandated – it is clear that the likely result would be a higher rate of interference investigation requests, with the attendant costs and poorer service quality for end users than is the case for WDSL services today.

"Clearly, such a requirement would also impose costs upon Telstra – its technicians would be required to spend a greater proportion of their time identifying and rectifying the faults that result from the lack of an underlying PSTN service, on top of the existing levels of field work that they are already required to carry out."

Telstra has previously argued that its ADSL provisioning systems require the presence of an underlying active PSTN service — and that changing that could cost the telco significantly.

The incumbent lays out those costs in its supplementary submission, though they are completely redacted in the public version, and provide no further clues on how expensive Telstra believes a mandated Naked DSL service could be.