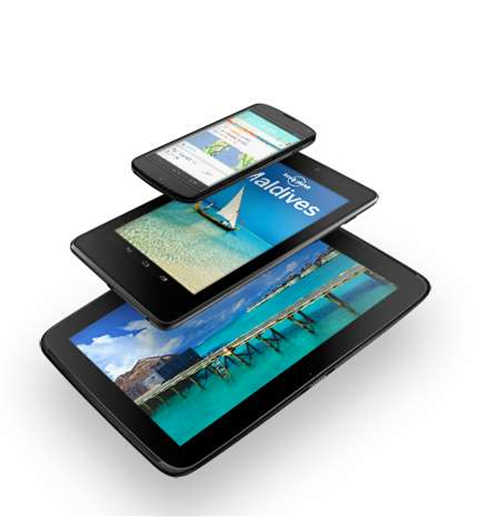 Google unveiled a larger version of its Nexus-branded tablet computer on Monday, and updated its mobile gadget and online content offerings as competition with Apple , Amazon.com and Microsoft heats up ahead of the Christmas sales season.

The device follows a spate of new product launches by the technology leaders in recent weeks, including Apple's iPad Mini last week and software-maker Microsoft's first-ever home-built tablet, the Surface.

Google, the world's No.1 Internet search engine, has pushed deeper into the hardware business at a time when consumers are increasingly accessing the Web on mobile devices.

Google's new Nexus 10, made in partnership with consumer electronics company Samsung , is the first 10-inch tablet to come to market under Google's Nexus brand. The device, with prices starting at $US299 ($469), will be available on November 13 in the United States and seven other countries, Google said in its official blog on Monday.

Google was scheduled to introduce the device at a media event in New York on Monday, but was forced to cancel because of Hurricane Sandy.

Google also said it was expanding its online movie and music retail businesses to several countries in Europe.

And the company introduced an improvement to its online-music storage service. The new "matching" feature scans songs in a consumer's music collection and automatically creates an online or "cloud-based" library of the same tracks which consumers can access from any device or computer.

Google said the music matching feature, which only works with tracks that are part of the Google Play store's music catalog, will be available in Europe on November 13 and in the United States soon after.

Google also updated its smaller, Nexus 7 tablet released earlier this year. It increased the storage on the $US199 ($249) version of the device to 16GB from 8GB, and introduced a new $US299 version of the Nexus 7 with a cellular data service option. Google also unveiled a new Nexus 4 smartphone, made in partnership with LG Electronics that features a quad-core processor and a 4.7-inch display.