Telstra buoyed by $1.6b subsidies: Vodafone 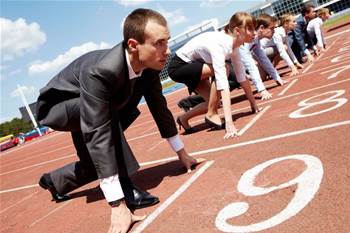 Vodafone Hutchison Australia has accused Telstra of being buoyed as market incumbent with up to $1.6 billion in industry subsidies over the past decade due to skewed regulation.

General manager of industry strategy and public policy Matthew Lobb used the figure to illustrate one possible obstacle to the competing mobile carrier's ongoing financial woes in the Australian market.

He said improper regulator decisions over the past ten years had entrenched Telstra as the "most unprecedented vertically and horizontally integrated telecommunications company" in the world.

He also said that while VHA's joint parent companies had successfully driven competition to regulated markets globally, current regulation meant its Australian operations were yet to reach "those dizzying heights".

"To be frank we will continue to struggle if the market structure of the Australian telecommunications market continues as it is," he told attendees of the CommsDay Congress in Melbourne this week.

"Yes, there have been very impressive reforms in the competitive framework but like the competitive revolution of the '90s, if there isn't ongoing vigilance of the market structure, then the benefits of market competition will not be realised."

He pointed to the competition regulator's recent declaration of mobile termination rates, which determines the fees paid between mobile carriers for calls between the three major networks.

Against VHA's and Optus' submissions, the Australian Competition and Consumer Commission lowered the rates which Lobb said had resulted in Vodafone effectively reducing its payments to Telstra by about half of those paid previously.

In total, lowered rates by competing telcos had "equated to about $1 billion over the last ten years".

Similarly, he said the universal service obligation regime, recently reformed as part of the NBN reforms passed through Parliament, meant Telstra was effectively being subsidised to the tune of $600 million by the rest of the industry.

"We find it strange the most profitable telco is getting subsidised by companies like Vodafone who aren't particularly profitable at the moment," Lobb said.

"Government money to build an infrastructure to the most profitable telco doesn't mean that consumers don't have any choice, it means it makes us very hard to enter those markets," he said.

The company posted a $131.3 million net loss for the first half of the 2012 financial year.

While Lobb recognised waning industry arguments against blaming Telstra for current sentiment, he urged the industry to ensure the public policy debate remained on the "main game; to ensure the competition settings are right".

"Industry structure is still limiting opportunities for innovation in Australia," he said.