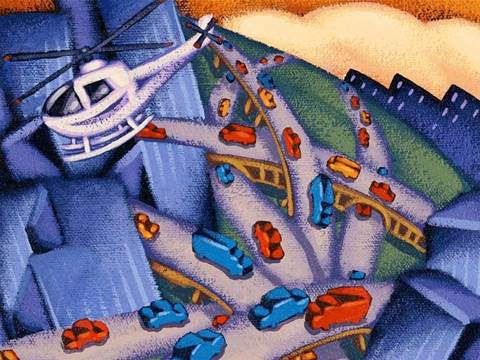 Melbourne has been thrown into traffic chaos after a computer network "malfunction" forced the closure of the Burnley and Domain tunnels.

The tunnels form part of the 22 kilometre CityLink automated tollway and have been closed since about 5.30am.

CityLink infrastructure manager Warren Gourley told 3AW (mp3) that the road operator had "lost the ability to communicate" with its incident detection and safety systems.

Because it was a network issue, CityLink's back-up option for managing tunnel traffic — an "alternate traffic control room" — was also affected, meaning the tunnels had to be closed.

"I guess anybody who's been involved with computer systems knows that from time to time they do give you some grief," Gourley told the radio station.

"We're looking into it. We've got our team very much focused on finding what the root cause is."

Gourley said it was the first time in CityLink's 13-year history that it had experienced such an issue.

He said that engineers were "a fair way" through a "progressive" check of each part of the CityLink network as they attempted to isolate what was causing the communication issue.

Gourley ruled out systems sabotage as a potential cause.

Earlier, a CityLink spokesman attributed the issues to "our incident detection and safety systems".

"Sometime in the early hours of this morning the issue became evident and in line with safety procedures the tunnels were closed," the spokesman said.

"CityLink would like to reassure customers that at all times the roadway was safe for travel, however, due to the system issue our ability to respond to potential incidents on the roadway has been compromised."

Motorists were being advised to avoid the area around the tunnels and to "delay travel in to the CBD if possible", according to a VicRoads alert.

News.com.au showed photos of heavy traffic being diverted away from the entrance to the Burnley tunnel.

The traffic issues were having flow-on effects for public transport, with Yarra Trams reporting "major delays" for some services via its Twitter page.

CityLink said later in the day that it would refund "all tolls incurred by customers for the duration of the event".

Account holders would be credited automatically, but customers that bought day passes would need to call 13 26 29.

Update 3.40pm: CityLink expects the tunnels could begin to reopen from 4pm.