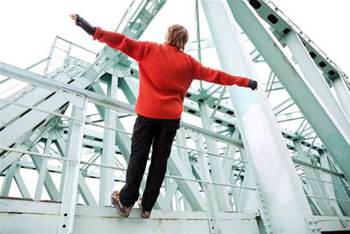 Australia has slipped in the latest global rankings on fixed line broadband penetration, according to the Organisation for Economic Cooperation and Development.

The country ranked of 21 out of 34 first-world countries for the key statistic — with 24.57 percent of Australians found to have such access — and fell below the OECD average of 25.61 percent for subscriptions.

The new ranking, as of December 2011, comes as a step backwards from the country, which ranked 18th a year-and-a-half prior, and 17th the year before that.

After jumping upwards between 2006 and 2007, Australia's fixed broadband penetration rate has remained stagnant at just under 25 percent and even declined to just above 23 percent in the last quarter of 2009 and first quarter of 2010.

The National Broadband Network rollout does not appear to have contributed significantly to Australia's ranking, with NBN Co reporting 2205 premises activated and 19,194 premises passed with fibre-to-the-home connections at the same December 2011 cut-off date.

The penetration rate put Australia on par with Israel and Spain but placed the country in the bottom third of countries on the key broadband statistic.

Switzerland took the top spot for the first time, with an almost 40 percent penetration rate, followed by the Netherlands, Denmark, France, Norway and Korea.

New Zealand is also ahead of Australia, and above the OECD average, with 26.9 percent penetration, placing the country at number 17 in group of 34 countries.

Turkey bottomed out on the rankings, with approximately ten percent penetration.

The country fared better in wireless broadband penetration, with Australia taking the eighth spot behind the US, Norway, Denmark, Japan, Finland, Sweden and Korea, and ahead of New Zealand at number nine.

Communications minister Stephen Conroy repeated past statements that the OECD figures demonstrated the importance of the NBN rollout.

He did not address the continued slippage in ranking for the country.

"The NBN's fast, affordable and reliable broadband will help Australia rise up the OECD broadband rankings, even as other OECD countries develop their own super-fast broadband capabilities," he said. 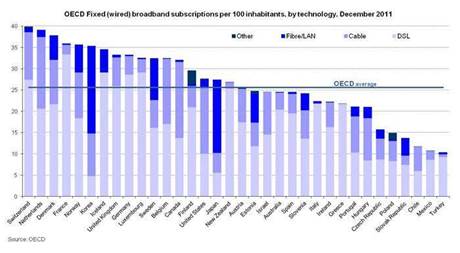