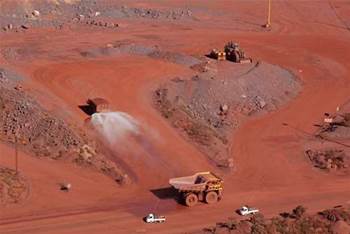 Inside a mining entertainment system rollout.

A video posted to YouTube on June 5 reveals the rollout is occurring at the 502-room Central REG Camp, which will service BHP's Area C mine.

The location is unmasked by a network diagram shown during the short film.

A further clue about the camp's owner is revealed by Telstra's technicians staying at the Spinifex Village, which is located at BHP's Yandi mine site, about an hour's drive from the Area C mine.

The video shows plans to install entertainment units in each of the rooms at the accommondation camp, along with 160 media converters and accompanying cabling.

It also provides a rare glimpse into the installation works at camps on remote mine sites.

It shows Telstra technicians installing set-top boxes in the under-construction village and provides a look at switch and server configurations inside the site's "Comms Hut".

A number of unpacked HP boxes are also visible in the Comms Hut.

Design and construction firm VDI is mostly responsible for the construction of the Central REG Camp under a varied contract signed in November last year, according to a report by the West Australian. Work on the camp is due to be completed in August.

Telstra promises in brochures that its Smart Camp system is "easy to set up with low capital costs".

Update 10/7 8.45AM: The video has been made 'private' and is no longer publicly viewable.