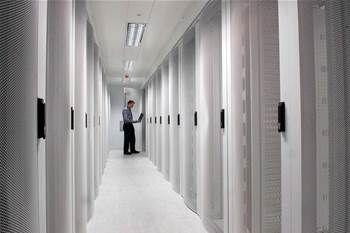 A computer room is any facility with capacity of more than 10 kilowatts, potentially excluding many smaller businesses that had lower capacity computer environments.

According to the survey of 300 Australian and New Zealand organisations, approximately 12 percent of the remaining data centre space is devoted to off-site, controlled facilities, while some 14 percent is deemed to be true co-location sites.

Technology solutions director, Kevin Burman, said he is "amazed" at the survey results.

The firm tracked a three to four percent gradual migration away from office-based computer rooms to co-location spaces, a rate which could increase as additional pressures such as power bills, storage needs, and the imminent NABERS energy rating begin to bear down on facility managers and chief information officers alike.

However, office-based computer rooms in many cases remain a cheaper option than outsourcing to managed or co-location services.

"We're not convinced that price really is the driver of [co-location moves]," Burman said.

"We think it's more risk and more to do with getting away from non-core traits within your environment. [For example], are we an airline or are we an IT shop?"

The Colliers survey gauges the proportion of on-site, off-site and co-located data centres in operation.

The data shows a changing proportion of co-location to controlled off-site or on-site computer data rooms depending on availability in each city, and the perceived risk of owned versus managed services.

Responding businesses in Adelaide and Auckland featured the highest levels of on-site rooms at 80 percent of data centre space in each city. Co-location use in Auckland was negligible, according to the survey.

By contrast, only 60 percent of Sydney offices surveyed had an on-site computer room, with co-location space accounting for approximately 25 percent market of the data centre market.

Less than half of Wellington's data centre and computer room market is in on-site computer rooms, a figure Colliers project services consulting director, David McEwen, suggests is due to the increased environmental volatility of the area.

The industry type, too, weighed heavily on the proportion of on-site, off-site and co-located data centres.

Where IT, government, construction and finance sectors were likely to adopt co-located facilities, those in the legal profession appear to be more attached to on-site facilities.

Businesses of more than 250 employees each feature most prominently in co-located spaces, at nearly 40 percent of market share for the business size.

"There are strong incentives for many organisations who are less concerned about risk to keep them local," McEwen said.

"The IT manager can go in and touch it, it's a one-stop shop for an organisation that doesn't have many offices, less communications cost. And from a cost-of-ownership point of view, having an office-based computer room — sure you can't get to a Tier III standard, but most organisations aren't concerned with that."

The increasing glut of co-located space, particularly in Melbourne and Sydney, could drive down pricing for off-site facility space.

A recent survey of data centre experts by iTnews found an increasing preference for co-location space as purpose-built facilities continue to offer a more stable and scalable data centre solution over off-site and on-site controlled facilities.

However, McEwen doubted even competitive prices would sink enough to compete with the cost of an on-site computer room.

The decision to co-locate or leave a computer on-site had increasingly become a factor for facility managers in rent negotiations too, as cost factors and the potential impact on a building's energy rating allowed companies without data rooms to negotiate more heavily.

In addition, McEwen said "savvier landlords are recognising that they've got an organisation that takes 5000 square metres and has a 100-square metre computer room, they're much more likely to get a renewal than an exit come end of lease".

According to Burman, the cost of migrating to a co-located facility, or between on-site facilities, has become increasingly heavy, with outsourcers seeing the moves as "a bit of a cash-cow".

"I think the big question mark is over how they get there — are they going to physically pick up what they're currently going which is obviously very complex," he said.

He pointed to Metronode's recent signing of the NSW Government; a ten-year, $182 million contract that would see state government departments consolidate hundreds of facilities down to two newly built centres.

The NSW Health and Education departments, both "complex structures", have been named anchor tenants of the Metronode facilities.

While the facilities are due for completion by the end of next year, the migration time, planning and cost could easily draw out timeframes and cost.

"The planning and so on for consolidating those data centres could well be years... the question will obviously come as to how it gets funded — is it funded out of Health dollars or out of additional public spending?" he said.

"We've seen a number of projects come through [where] migrating from one place to another is roughly the cost of building a new data centre.

"Almost excluding physical IT equipment — if you're building a $30 million facility and populating it, the migration costs could be $30 million. If you start absorbing internal resources across, then that number could be much higher."

Migration costs could be lower for those who had already taken the time to virtualise their environments, but the general proportion of 60 percent newer infrastructure versus the remaining in legacy environments for many corporations made the decision a difficult one.

"Most projects we're seeing are a hybrid [move]," McEwen said.

"You'll have some 'lift-and-shift' put it on a truck, and then you'll increasingly have a component that's a virtual component."