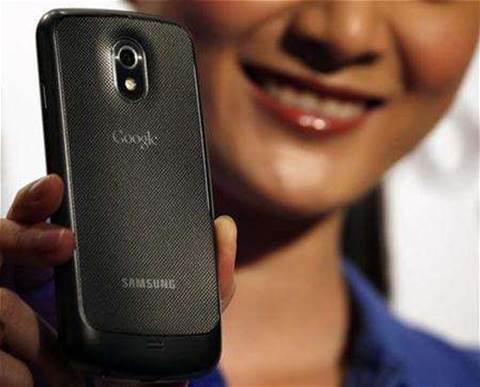 Cybersecurity experts have uncovered a flaw in a component of the operating system of Google's widely used Android smartphone that they say hackers can exploit to gain control of the devices.

Researchers at startup cybersecurity firm CrowdStrike said they have figured out how to use that bug to launch attacks and take control of some Android devices.

CrowdStrike, which will demonstrate its findings next week at a major computer security conference in San Francisco, said an attacker sends an email or text message that appears to be from a trusted source, like the user's phone carrier.

The message urges the recipient to click on a link, which if done infects the device.

At that point, the hacker gains complete control of the phone, enabling him or her to eavesdrop on phone calls and monitor the location of the device, said Dmitri Alperovitch, chief technology officer and co-founder of CrowdStrike.

Alperovitch said the firm conducted the research to highlight how mobile devices are increasingly vulnerable to a type of attack widely carried out against PCs. In such instances, hackers find previously unknown vulnerabilities in software, then exploit those flaws with malicious software that is delivered via tainted links or attached documents.

He said smartphone users need to prepare for this type of attack, which typically cannot be identified or thwarted by mobile device security software.

"With modifications and perhaps use of different exploits, this attack will work on every smartphone device and represents the biggest security threat on those devices," said Alperovitch, who was vice president of threat research at McAfee before he co-founded CrowdStrike.

Researchers at CrowdStrike were not the first to identify such a threat, though such warnings are less common than reports of malicious applications that make their way to online websites, such as Apple's App Store or the Android Market.

In July 2009, researchers Charlie Miller and Collin Mulliner figured out a way to attack Apple's iPhone by sending malicious code embedded in text messages that was invisible to the phone's user. Apple repaired the bug in the software a few weeks after the pair warned it of the problem.

The method devised by CrowdStrike currently works on devices running Android 2.2, also known as Froyo. That version is installed on about 28 percent of all Android devices, according to a Google survey conducted over two weeks ending February 1.

Alperovitch said he expects to have a second version of the software finished by next week that can attack phones running Android 2.3. That version, widely known as Gingerbread, is installed on another 59 percent of all Android devices, according to Google.

CrowdStrike's method of attack makes use of a previously unpublicised security flaw in a piece of software known as webkit, which is built into the Android operating system's Web browser.

Webkit is also incorporated into other software programs, including Google's Chrome browser and the Apple iOS operating system for the iPhone and iPad.

CrowdStrike said it had not attempted to create software to attack iOS devices or the Chrome browser.