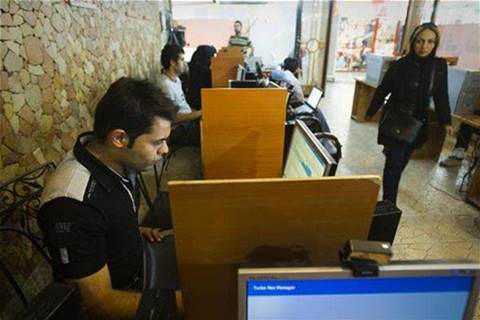 Millions of Iranians have suffered serious disruptions to email and social networking services, raising concerns authorities are stepping up censorship of opposition supporters ahead of parliamentary elections next month.

Iranians have grappled with increased obstacles to using the internet since opposition supporters used social networking sites to organise widespread protests after the disputed 2009 re-election of President Mahmoud Ahmadinejad.

The government denied any fraud in the vote, which ignited street protests that were crushed violently by security services after eight months.

The country is preparing to hold parliamentary elections on March 2, the first time Iranians will go to the polls since President Ahmadinejad's disputed re-election.

The new internet blockade affected the most common form of secure connections from Friday, according to outside experts and Iranian bloggers.

Traffic was said to have returned to normal on Monday.

"I haven't been able to open pages for days but now it's working again, although slowly," said Hamid Reza, a 20-year-old student in Tehran who was reluctant to give his surname.

The cut-off appeared to target all encrypted international websites outside Iran that depend on the Secure Sockets Layer protocol, which display addresses beginning with https, according to Earl Zmijewski of Renesys, a US company that tracks internet traffic worldwide.

Google, which uses SSL for its Gmail service, reported that traffic from Iran to its email system fell precipitously.

Iran's Ministry of Communications and Technology denied knowledge of the disruption.

"The government is testing different tools," said Hamed Behravan, who reports on Iranian technology issues for the US Government-funded Voice of America.

"They might have wanted to see the public reaction."

Many Iranians are concerned the government may be preparing to unveil its much documented national internet system, effectively giving the authorities total control over what content Iranian users will be able to access.

The authorities say it is designed to speed up the system and filter out sites that are regarded as "unclean".

"The internet is an uninvited guest which has entered our country," said Mohammad Reza Aghamiri, a member of the Iranian government's Internet filtering committee.

"Because of [the internet's] numerous problems, severe supervision is required."

He told the daily Arman that internet search engines like Google were a threat to the country.

"We have never considered Google as appropriate to serve Iranian users, because Google is at the service of the CIA," he said. "It has adopted a vivid hostile stance against us."

"It could just be a coincidence but my guess is that the system was looking to block communication between opposition supporters," said an Iranian analyst who did not want to be named.

The disruption has riled some Iranian members of parliament and they have vowed to look for those responsible.

An MP, Ahmad Tavakoli, told the semi-official Mehr News Agency that the issue was creating widespread discontent that could "cost the establishment dearly".

"This filtering leads people to break the law, and using proxies makes the blocking of sites and signals ineffective, because using proxies becomes widespread," he said.

Authoritarian Arab governments under popular pressure have sought to shut down Internet service to make it harder for opponents to mobilise protests but with little success.