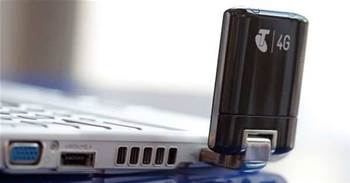 The dongles, sold between 27 September and 31 December, account for approximately a quarter of the 436,000 new mobile broadband services added to Telstra's network during the first half of the 2011-2012 financial year.

Chief executive David Thodey told media at a financial briefing this week that the LTE-capable HTC Velocity 4G, launched last month, had also become the company's "third most successful handset in our range" in recent weeks.

Mobile broadband services accounted for approximately half of the 958,000 new mobile services the telco added to its network since July.

Overall, the company is tracking to grow beyond the 1.6 million customers it added across the whole 2010-2011 financial year.

Thodey said LTE devices in particular were "selling like hotcakes" and a spokesman confirmed the sales were ahead of forecast.

"[It's] a sign of early success for Telstra and it's first-to-market LTE strategy," said Nicole McCormick, telecommunications analyst at Ovum.

"This is the early adopters jumping on LTE - a sign that, at least for that target market, there is some appetite for faster speed services."

McCormick said the success of the HTC handset was "also a big testament" to Telstra's success in launching the network.

While Telstra has used LTE partly to relieve strain on its Next G network, the exponential growth of 3G subscribers has continued to weaken the network's speed and capacity in some areas.

"[The] network performed very well but when you add 2.5 million services over an 18 month period, that's an enormous amount to cater for," Thodey said.

The LTE network is currently limited to capital cities and major population centres but is expected to gradually expand to other areas over the coming years.

Despite Telstra's first-mover advantage, it is expected to face competition from rivals Optus and Vodafone Hutchison Australia by the end of the year as each of the competitor telcos begin to activate their own, similarly capable networks.

Thodey also revealed Telstra's plans to adopt the Net Promoter Score as a gauge of customer satisfaction and their adoption of the company's values.

Net Promoter was developed in 2003 for a wide range of industries. It will be implemented over "a couple of years" within Telstra under customer experience group managing director Robert Nason, who has also led the company's Project New initiative to simplify business structure.

"We want to get to a point where customers are not just satisfied, we want them to become promoters or they recommend Telstra to other people," Thodey said.

"We want them to become advocates for Telstra."

While delegating the task to Nason - who has been attributed to several rounds of outsourcing and redundancies in the company over recent years - Thodey said the index would not be used as an internal metric.

"This is a big change for this company - it really means every metric, every part of the company has got to change the way they measure," he said.

It comes as an about-turn for Telstra which, despite focusing on customer experience and satisfaction for several years, has previously dismissed Net Promoter scores as irrelevant.

"My understanding is that NetPromoter scores are a commercial measurement, and not focused on customer service," former group managing director of public policy, David Quilty, told the Australian Communications and Media Authority's Reconnecting the Customer Inquiry at a public hearing in 2010.

Though it will be the first time Telstra adopts the score officially, external research in 2006 placed the company's Net Promoter score at -44 -- last against rival Australian mobile networks.

More recent research last month by Roy Morgan found customer satisfaction among Telstra mobile customers was stable across 2011, with 65 percent of customers who were "very satisfied".

Telstra's score trailed behind the 68 percent industry average and behind major rival Optus.